"Life's all about good friends, good grub and good times! Let's kick it into gear and LET IT RIDE!"

Pork Chop is an Urb residing in Urbzville's district, Gasoline Row. Pork Chop, as his friends call him, is the oddest of the mix. No one really knows his history or age, or even cares to. He certainly has the most colorful stories—real or fictional!

He likes Chrome domes, Fresh asphalt, and anything that gets grit under the nails. He dislikes financial advisers, Rubber duckies, and Cubby hole organizers. Getting to know him will result in being taught the social moves: "Body Bonk".

In comix the "Outlaw Angst" by Peter Bagge, Pork Chop is telling one of his infamous stories to Jet Rockit, who is clearly annoyed by it, as a newcomer named Jayde is being tested by Duke Headbutt. Jayde succeeds in cooking up sausages that Pork Chop happily consumes. When Sharkey Spitz becomes upset with Jayde, as it appears she has a crush on Duke. Jayde defuses this situation by preforming the social move "Body Slam" on her, which gains her instant favor with the group. Pork Chop exclaims that "As far as I'm concerned you're In!".

He is even more impressed when Jayde builds a motorcycle from a tricycle.

In the comic it is revealed that all of his war stories were total fabrications. 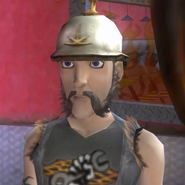 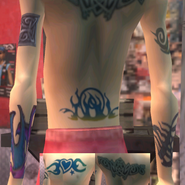 tattoo reference
Add an image to this gallery
Retrieved from "https://sims.fandom.com/wiki/Pork_Chop?oldid=874973"
Community content is available under CC-BY-SA unless otherwise noted.