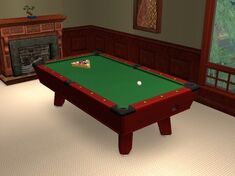 For other uses of "pool", see Pool (disambiguation).

While prices vary from game to game, a pool table is expensive. A pool table fulfills the fun need and improves Room/Environment slightly.

In The Sims, a pool table was available in the base game, costing §4,200. Superstar added another pool table. Up to two Sims can play on the same table.

Fun: 6
Notes: Can only be used by adults

In The Sims 2, pool tables appear in the University, FreeTime and Apartment Life expansion packs. They are cheaper than in The Sims or The Sims 3, but are still expensive, costing between §1788 and §2000.

A pool table can be used by Sims who are teens and older. Up to four Sims can play; if three or four are playing, the Sims form sides. Selectable Sims can join a game if the player clicks on the table and selects "Join (NAME)", and Sims on the lot can be asked to join a game by clicking on them and selecting "Join (NAME)". In addition, Sims on the lot can, and often will, join a game autonomously. Sims playing pool play Eight-ball.

Turbocharger Pool Table by You Got Muscle[edit | edit source]

Pool tables returned in The Sims 3: Showtime, which was first confirmed in Showtime live broadcast.[1] Pool tables also appear in University Life and Into the Future.

The pool table can be used by Sims who are teens or older. It can be played solo or in groups of up to 4.

The pool table has a Tricks feature which expands on the "trick shots" that were available in The Sims 2. Sims can perform tricks when playing pool. If they succeed, they will get better at pool, but if their tricks go wrong somehow, their skill in pool will decrease.

There are four tricks: 8-Ball Frappe, Shave and a Haircut, Hole in Two and Putt Putt Gnome.[2]

There are two pool tables in Showtime. They are Side Pocket Pool Table and Luxtacular Ultra Deluxe Pool. They cost §4950 and §5950 respectively. 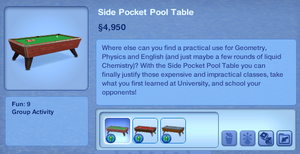 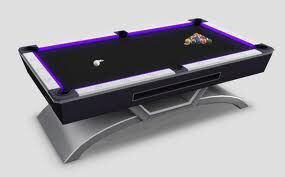 Luxtacular Ultra Deluxe Pool
Add an image to this gallery

Into the Future[edit | edit source]

Retrieved from "https://sims.fandom.com/wiki/Pool_table?oldid=924390"
Community content is available under CC-BY-SA unless otherwise noted.