The Sims Wiki
Register
Don't have an account?
Sign In
Advertisement
in: Services, Types of NPCs, Police officers
English

Not to be confused with Law enforcement. 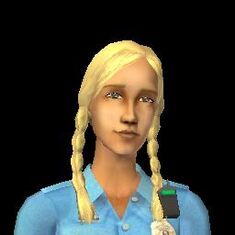 Demi Love, one of the pre-made police officers from Pleasantview

The police officer is an NPC featured in The Sims, The Sims 2, and The Sims 3. They typically arrest burglars, among other tasks.

The police will come automatically when a burglar alarm goes off, or when a Sim calls them over the phone. They will also come autonomously in certain cases.

The best way to protect the house from burglars is to install burglar alarms, which will automatically summon the police when they go off. If Sims have to call them manually, they probably won't arrive in time.

The police officer NPC does not appear in The Sims 4, although the Get to Work expansion pack features police-related jobs for Sims (and work at a police station) through a detective career.

In The Sims, there is one police officer named Michelle the Policewoman. If summoned when there is a burglar, she will arrest the burglar, and he will go peacefully. The family will be reimbursed for what was stolen, and will receive a §1000 reward. Michelle does not drive a squad car, and will always arrive and leave the lot on foot.

In The Sims: Livin' Large, if a Sim uses the "Concoctanation Station" chemistry set outdoors during school hours, Potion Enforcement Agent Angie, a police officer, will come and fine the Sim §500 because of the smell. Oddly, this will also happen if a Sim drinks a potion during those hours, even if it was made outside of school hours. If a Sim with low logic skill uses the set, there is a chance that a failed potion with a bad smell will be created, in which case the police will come and fine the Sim for the smell.

Prior to The Sims: House Party, Sims who have a party with a large quantity of guests at night will receive a visit from the police, who will warn them about the noise and ask them to dissolve the party. If Sims do not send all the guests home, the officer will reappear after a period of time and fine the Sims.

Calling in a false alarm to the police station results in a stern warning, although no fines or any other consequences will be issued.

If the policewoman arrives on the current lot due to a burglar, she will be seen holding a baton. Once the burglar is spotted, the officer will blow her whistle and the burglar stops where he is at, with his hands raised.

Sims can also call the police to report a runaway teen. If the teen is found, they will be brought home, and the teen will receive a negative memory. The police may also bring back a teen who has been caught sneaking out.

If a Sim throws a party that has not ended by 11:00 PM, they will receive a visit from the police, who will break up the party. When the police arrive, the party will end immediately, unless cheats are used to remove the police car and officer.

In The Sims 2: University, if a Sim with a low aspiration bar uses the Genuine Buck's Famous Counterfeiting Machine aspiration reward, there is a possibility that a police officer will arrive and fine the Sim for counterfeiting money.

In The Sims 2: Pets and console versions, if pets run away, Sims can call the police and have them try to find the runaway pets. Whether or not the police succeed at this is determined randomly.

There is a 4:1 chance that the police officer will be a man rather than a woman.

Much like The Sims 2, police that are called when there is a burglar on the lot will fight the burglar. If the officer wins, the burglar is arrested; otherwise the burglar makes off with the stolen items. If the burglar failed to steal anything on the lot before fighting the police officer, the burglar will flee empty-handed regardless if they won the fight or not. This usually occurs if a burglar alarm is placed on the lot. If called when there is no emergency, they will fine the Sims §200-§500, and will confiscate household items if the household does not have enough money. However, there are instances of a glitch occurring where the officer will not acknowledge the burglar and instead fine the household.

Occasionally, whilst the player's Sim is at work in the criminal career, a policeman/woman will come to arrest them. The Sim will then be detained at the police station for 12-24 Sim hours. Teens that violate curfew or get busted pranking[TS3:G] a school will be brought home by the police. In The Sims 3: Late Night and The Sims 3: Supernatural, vampires can get arrested if they raid the grocery or the hospital. In The Sims 3: University Life, Sims can get arrested if they streak or make street art. If a Sim goes into town naked[which?], the police will fine them §500.