The Sims Wiki
Register
Don't have an account?
Sign In
Advertisement
in: Life states, Into the Future, Plumbots
English 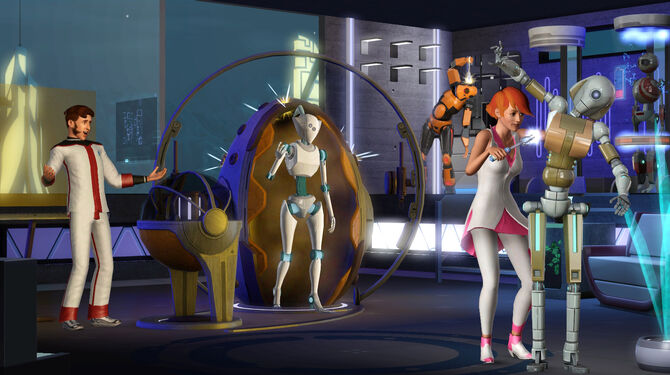 Plumbot
A life state · Featured in:

Not to be confused with SimBot, Servo, or the Plumbob.

A Plumbot scanning a Sim.

Plumbot is a life state that is introduced in The Sims 3: Into the Future.

Plumbots can also scan Sims or other Plumbots. This has a small chance of revealing their traits or trait chips.

Since Oasis Landing is set in a future world, relative to the other worlds in The Sims series, they can be considered as the successors of Servos and SimBots.

Unlike SimBots or Servos, Plumbots are immune to water, and even enjoy it.

A Plumbot's Simology panel will show the bot's name, gender, and quality (on a scale of 0 to 10). It will also show which trait chips are installed.

A Plumbot can gain Lifetime Happiness points from high Mood if the Simulated Emotions or Sentience trait chips are installed.[4] They may also have wishes, even without specific trait chips, which can be promised and fulfilled for happiness as normal.

In the Q&A on July 30, 2013, it was mentioned that Plumbots do not age, but can have accidents. It was implied that Plumbots that are kept maintained will last indefinitely,[3] which is true, as a Plumbot can only die by being crushed by a meteor or falling from the sky. A bug causes some Plumbots to actually have a birthday and age up, causing their bodies to disappear. A guide for restoring them if this happens is here.

Plumbots have a quality rating that ranges from 0 to 10. Skilled bot-builders can increase a Plumbot's quality by tuning it up or by upgrading its trait chip slots. Increasing a Plumbot's quality increases the amount it can be sold for, and higher quality Plumbots lose Battery Power and Maintenance more slowly.

A Plumbot is unable to increase its own quality level, though with sufficient skill in Bot Building, it is able to randomly increase the quality of other Plumbots just as a normal Sim can.

Like Servos from The Sims 2: Open for Business, Plumbots have 4 needs. Those needs are: Battery Power, Maintenance, Social, and Fun. Whether or not Social and Fun are greyed out depends on which trait chips are installed. Plumbots have a mood meter, but it will be greyed out unless an appropriate trait chip is installed. Plumbots do not need to eat, and will not want to eat.[3]

This is the Plumbot equivalent of energy. The quality of a Plumbot affects how quickly this decays. The higher a Plumbot's quality is, the longer its battery power will last.

Plumbots can recharge at the Nexus-9 Non-Organic Charging Station, which can be bought in Buy mode for §710. They can also syphon power from electrical appliances, though this will greatly deplete their maintenance need and sometimes break the appliance. Plumbots can be shut down, and will replenish power while shut down.

The Solar Powered trait chip allows a Plumbot to use solar power when outside during daylight, and the Efficient trait chip lets Plumbots use power more efficiently.

Unlike Servos and SimBots, Plumbots will require maintenance. The quality of a Plumbot affects how fast this decays (the higher the quality the slower it decays). If a Plumbot's maintenance bar is empty, it will begin to malfunction. Plumbots are able to maintain themselves.[3] When a Sim or Plumbot with a medium or high Bot Building skill tunes a Plumbot, its quality may rise. The Plumbot's quality can only increase if it was lower than the tuner's Bot Building skill. A Plumbot that accrues 15,000 Lifetime Happiness Points can purchase the Maintenance Master reward, which slows down the Maintenance motive.

Plumbots do not have traits as Sims do. Instead, they can be equipped with special chips, called trait chips, which give them various skill sets, abilities, and features. A Plumbot will have between 3 and 7 trait chip slots, depending on its quality, and players can fill as many slots as they wish. Unlike traits, trait chips can be removed and replaced at any time, though there is a chance that removing a trait chip will damage it, when removing one from a Plumbot not in the household. When this happens, it will also make the Plumbot dislike the Sim who removed the chip, if the two are not already friends or better.

The announce trailer suggested that it would be possible to create Plumbots inside a special machine. The live broadcast from July 30, 2013 indicated that clicking on the machine would allow the player to enter Create a Bot, which is similar to Create a Sim, but oriented toward building robots.

This machine is Reventlov's Bot Workshop. It can be purchased in Buy mode for §1,750. In addition, the Bot Emporium in Oasis Landing has a Bot Workshop that Sims can use. Access to Create a Bot requires at least level 2 of Bot Building skill, and is not free. Creating a Plumbot costs §250, and customizing an existing Plumbot costs §100.[5] Create a Bot creates Plumbots with no programming. Trait chips must be bought or made separately and installed after the Plumbot is created.

Create a Bot allows the player to customize the Plumbot by choosing a head, body, arms, and legs. The player can color the parts with Create a Style. There is a "randomize" button, as there is in Create a Sim.

The very first of the five tabs is Basics. This is where the player chooses the Plumbot's name and gender.[3]

Name: Type in the Plumbot's name. Players can have up to 13 characters.

Gender OS: Choose either Male or Female. The Male (♂) or Female (♀) will be used as an icon for Basics

Voice: Choose one of three voice types. A slider and buttons indicates the controls the pitch of the Plumbot's voice.

The player can choose a head from the collection. The color and pattern of the parts can be chosen by the player with the Create a Style tool.

The player can choose a torso from the collection. The color and pattern of the parts can be chosen by the player with the Create a Style tool.

The player can choose arms from the collection. The color and pattern of the parts can be chosen by the player with the Create a Style tool.

The player can choose legs or a hover bottom from the collection. The legs is used for walking and running while hover bottom is used for floating in the air, however the movements are much more like the legs. The color and pattern of the parts can be chosen by the player with the Create a Style tool.

Unlike activated Servos from The Sims 2: Open for Business and SimBots from Ambitions, Plumbots can be sold. Selling a Plumbot requires a TechnoTycoon Plumbot Stand, which is available in Buy mode for §1250, or going to the "Nuts n' Bolts Bot Emporium" in Oasis Landing. A Plumbot cannot be sold unless it is present.

A Plumbot scanning a Sim 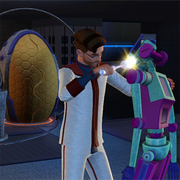 A Plumbot using a recharging station

A Plumbot using the Holo-Projector chip.

Plumbot with a head similar to a Geth from the Mass Effect series.

Plumbot cuddling with a Sim

Plumbot eye(s) change to a heart when preforming a romantic action (cuddling on the couch, etc.).

A Plumbot proposing to a Sim

Plumbot birthday (4 of 4 which means they can age up)

This is the end result of Plumbot birthday (1)

The end result of the Plumbot birthday (2 of 2) 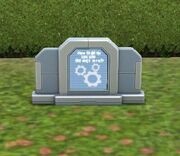 A Plumbot building a snowman with his creator 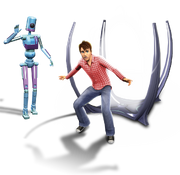