This appears above the active Sim.

The Plumbob (sometimes spelled differently — see below) is a green crystal used in most titles of The Sims series (including the MySims series) to identify the character selected and to which the player can give commands. It is also used to show the mood of playable Sims. The plumbob has become an important symbol to the franchise, and it is widely recognized by players around the world as one of the game's identities. Several game covers, logos, and special products feature plumbobs in their designs.

If the Sim is on a date, the date will have a small blue plumbob (known as a DateBob) which will reflect their mood. The deeper the blue, the better their mood. Superstar Sims will have a StarBob appear over their head, taking the form of a solid gold star. The StarBob only appears when they are inactive and will be replaced by the regular plumbob when control is switched to them. The Starbob makes it easy to identify which Sims are famous.

In The Sims 2, the plumbob is white if the Sim's aspiration bar is in platinum, which produces a very high mood regardless of the Sim's motives. Otherwise, it is bright green if the Sim's mood is high, and orange or bright red if it is low. If the Sim's mood is somewhere in between, it will be a shade of green-yellow reflecting the approximate level.

In Nightlife, the members of a group in an outing or a date partner will have a small blue plumbob over their heads, much like The Sims: Hot Date. This plumbob doesn't reflect their mood, however. In Open for Business, business employees have a small spherical plumbob over their heads, which could be green, yellow, or red depending on their mood and motives. It is important to watch the color of employees' plumbobs so as to know when to give them a break, or they may decide to quit if their motives drop too low.

The plumbbobToggle cheat can be used to hide the plumbobs, which can be useful for moviemaking or snapshots. This cheat, however, doesn't hide the small outing and employee plumbobs.

In The Sims 3, the plumbob is green if everything's great, yellow if the Sim isn't in a good mood, and red if the Sim has multiple and/or potent bad moodlet(s) or low needs.

In addition to the plumbob spinning above the active Sim, it also moves up and down slightly. This is most noticeable when the game is in speed 2 or 3.

Contrary to initial belief, the background of a Sim's icon changes color depending on their need levels specifically, not their mood level, unless their mood is lower than their needs. This is for the player to actively fulfill the Sim's needs or allow the Sim to autonomously fulfill them and keep the Sim's mood elated and from shifting moods. The colors shift from the average of each need bar, from green (Good mood), Yellow (Not very good) to red (Bad mood). The plumbob also has a transparent, glass like surface so the user is able to see objects hidden behind it.

Sims with Ensorcelled moodlet have a purple glowing plumbob.

In The Sims 3: Pets (console), If Sims are in debt with their karma, these words will appear on the screen: "The Almighty Plumbob is deciding your fate."

If plumbob is in a bad mood, Sims will use a random bad karma power.[confirmation needed]

If plumbob is in a good mood, Sims will be spared.[confirmation needed]

In The Sims 4, the color of the plumbob depends on the lowest mood. It ranges from green if everything is alright to yellow and orange. It appears red if a mood is critically low.

Each life state has a different plumbob band representing their life state.

In the The Sims 2 for PlayStation Portable storyline, (events which occur after The Sims 2) the player's Sim will encounter Dr. Dominic Newlow aka Dr. Dominion (the antagonist), who has produced a device that can create the "Green Diamond" to control other Sims, including the player's current Sim. The ending of the game breaks the fourth wall, as he reveals that the "Green Diamond" is a mind control device used by an "Outside Force" (a nod to the player).

During normal gameplay other than the storyline, there doesn't seem to be any plumbob over the Sim being played, even though the player has control over them. It seems that the player controls the Sims using the plumbob (selected Sims will have a plumbob over their heads and become controllable) which became the game mechanics until the revelation of an outside force at the end.

When the game ends, the character talks to Isaac Rossum about the "Green Diamond", but they end up agreeing that all these things about the "Outside Force" can't be true and that mad scientists can cause peoples' brains to blow up.

The plumbob once again assumes the role of a mind control device in The Sims 3: Showtime. Players who control a genie can take command of a Sim by ensorcelling them, causing a purple plumbob to appear over the targeted Sim for approximately four hours. Whether this purple plumbob is the source of the genie's control over the Sim or just a sign indicating the genie's control over them is unclear, but due to the plumbob's background as a mind control device, the latter is quite likely.

In The Sims Social, the plumbob (in the loading screens it is spelled "PlumBob") is always green regardless of the mood the Sim actually is in.

Variations of the Plumbob[]

Several different spellings for this object's name appear throughout The Sims series, including in games, on official websites and pages, and on fan sites. For instance, in The Sims the name is spelled "PlumbBob," and in The Sims 2 it is spelled "Plum Bob". SimGuruSarah has stated that the spelling used by the development team for The Sims 4 is "plumbob", though she notes that other spellings are sometimes used accidentally.[1] It is worth noting that this object takes its name from the plumb bob, a weighted object hung from a string, which is used as a vertical reference line; the real-life object's name is often spelled "plumb bob" or "plumb-bob."

The plumbob is displayed as a hexagonal bipyramid, making it a dodecahedron. It has 12 isosceles triangles, 18 edges, and 8 vertices. 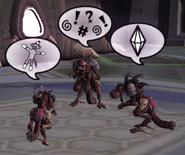 Creatures in Spore discussing a sock monkey, the PlumbBob, and swearing

Evolution of the Plumbob painting