The Sims Wiki
Register
Don't have an account?
Sign In
Advertisement
in: Neighborhoods in The Sims 2, The Sims 2, Pleasantview
English

Pleasantview ( /ˈplɛzəntvju/) is one of the three pre-made neighborhoods shipped with The Sims 2. In theory, it is the neighborhood from the original The Sims game 25 years later. It is also mentioned that Gunther Goth founded Pleasantview.

There are a total of 22 residential lots in Pleasantview, and there are another 12 houses in the Lots and Houses bin. Out of these 22 houses, there are at least three mansions. Three homes are trailers, and may or may not be part of a trailer park. (The game does not treat them as part of a trailer park, but players can.) Several more houses make up a series of condos. Finally, one house is an old shack in the woods. The houses in the housing bin can add further variety, offering a hacienda, a Tudor, a bungalow, and even a farmhouse.

Furthermore, there are six pre-made families already living in the neighborhood, and two more in the family bin. For the families that start out moved-in, the median amount of family funds is around 1000 simoleons. Even a family with no significant income will generally have enough to pay one or two rounds of bills.

Pleasantview has many different districts and areas. When placing the water at the bottom of the screen, and viewing it as the water being the South, then: On the upper-left corner, there are some trailers. (The area is often interpreted as being a trailer park, but that's not necessarily the case.) Above the trailers is a wooded area with an isolated shack. In the upper-right corner, there is an area mostly made up of condos, and often called "The Condo Area" or "The Condo District". Around the western Main Street Area is the main commercial area, where the pre-made community lots can be found. Central and eastern Pleasantview contain large suburban houses. The only large house in western Pleasantview is the Pleasants' home. The south, by the water, is Wright Way, which contains the very large and fancy neighborhood (made up of only two unoccupied houses), though some include the Goths and Pleasants in this area. On the far bottom-left, across the bridge, there is a cliff area where small lots can be placed, but will nevertheless be slightly difficult to access.

Pleasantview is a small, grassy suburb, said to be in the outskirts of SimCity. It is situated close to the water, with several boats floating nearby at all times. Pleasantview is also nestled between three mountains, one on the western side, with a large bridge crossing over the water, and two smaller mountains on each side of the eastern road out of Pleasantview. There is also an abundance of trees, with a decently sized forest on the northwestern end of the town.

There are several distinct "districts" in Pleasantview, including a small trailer park, six condos, a small commercial district featuring a pool, a grocery store and a clothing store. Generally, the southern part of Pleasantview appears to be more affluent, with the houses closest to the water being by far the biggest and most expensive ones.

It is likely that the name "Pleasantview" refers to the town called Pleasantville in the 1998 film Pleasantville. The towns' names are very similar, and two of the pre-made Sims in Pleasantview are named Mary-Sue and Jennifer; while in the movie, one of the main characters is named Jennifer, possibly associated with Jennifer Burb, and she took the name "Mary Sue" after being transported to Pleasantville. Also, some of the other pre-made Sims in the Pleasantview storyline are named Skip, Don, and Betty, which are some of the other main characters in the movie, though it's possible that both the game and the movie use these names because they are rather common names or nicknames. Furthermore, the beta name of Pleasantview was "Pleasantville", and Strangetown's beta name was "Strangeville". Because of that, Pleasantview and Strangetown follow a pattern where the first compound is an adjective describing the nature of the town. Pleasantview could also refer to a city in California called Pleasanton due to the water, which could be the Sacramento River. However, it is also the name of a neighborhood in Edmonton, Alberta, Canada and a township in Michigan in the United States.

§1,040
Dina Caliente, Nina Caliente
Was it just coincidence that the Caliente sisters arrived on the eve of Bella's disappearance? And is their interest in Mortimer physical... or fiscal?

§968
Darren Dreamer, Dirk Dreamer
Darren is pursuing his dream of being an artist, while his son Dirk hits the books. And Darren may have found his muse, but will his creativity be enough to win Cassandra's affection?

§511,632
Mortimer Goth, Cassandra Goth, Alexander Goth
Cassandra is ready to start a family of her own, but can she tame the town Casanova? And can Mortimer bounce back after the disappearance of his wife Bella?

§968
Don Lothario
Who is Don Lothario? Is his engagement to Cassandra Goth genuine? And what about the rumor that her mother, Bella, was last seen scaling the deck of his condo?

§2,250
Daniel Pleasant, Mary-Sue Pleasant, Angela Pleasant, Lilith Pleasant
On the surface, Daniel and Mary-Sue Pleasant seem to have the perfect life, but is their love a flimsy façade? And can Angela and Lilith make the right choices when it comes to love?

§21,901
John Burb, Jennifer Burb, Lucy Burb
John, Jennifer and young Lucy have decided to trade the fast-paced city life for some fresh air, and hope to make a nice home here in Pleasantview.

§20,900
Herb Oldie, Coral Oldie
The Oldies are simply one of the nicest families around. Their years together through good and bad have made them into the wonderful parents, and grandparents, they are today.

Some The Sims 2 players are dedicated to recreating the original The Sims Pleasantview. Here are a few websites that have files to recreate Pleasantview:

Early build versions of Mortimer, Nina, Dina and Don, note that these versions are the ones featured in storytelling images for the neighborhood. 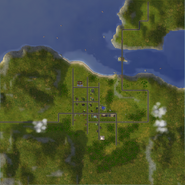