Not to be confused with Challenge event.

A player challenge is a goal which the player defines then attempts to achieve while playing a game in The Sims series. Challenges are not a standard part of the games themselves, but are instead created by players. These players may share their challenges with other players, including successes and failures. Some forms of challenges have become particularly well known within the player community of The Sims.

A legacy challenge is a challenge created by Pinstar that challenges a player to play a family through 10 generations.

The player starts with one adult Sim by themselves in what is known as a "legacy lot" (a lot, usually 5x5, with only the bare necessities for the Sim). A 6x5 lot suggests that the player is doing the extreme handicap. The original rules suggest 5x5, because it was created before 6x5 lots were introduced in the games. In the base game, the biggest lot that can be made is 5x5. The use of cheats and who the family members can marry are strictly regulated. In every generation, there is supposed to be an heir who keeps the legacy going.

In this challenge, the player starts out with a single sim, and their goal is to master all skills, aspirations (Including the hidden Grilled Cheese aspiration), careers (both branches are not required), get all the reward traits, and become a vampire, and reach the 'Grand Master' rank, and start a family as well to complete both toddler skills, child skills, and probably become an 'A Grade Student'. The rules restrict the use of cheats during the challenge. If the sim dies, they must be resurrected with the use of Ambrosia.

The Warrior Cat Challenge, is a challenge made by Seri! Pixel Biologist!, for The Sims 3 Pets. The challenge is based on the famous novel book series, 'Warrior Cats'.

The player starts with a single cat, working their way to make a big and strong clan in the forest, meadows, rivers, etc., by inviting strays and other cats to their clan. These animals must be wild and have made no human contact. Since a human is required in every household, one human can be created and considered to have been accepted into the clan.

The Poverty Challenge is a challenge, originally created by 'Yinakori' on ModTheSims, for The Sims 2.[1] There are strict rules about which items can be owned, and limitations on objects that can be carried in a Sim's inventory. Starting with only §100 and an empty lot, the player must find a way for the Sim to gain §20,000 without a career or cheats.

Alice and Kev[2] is an example of a modified Poverty Challenge from The Sims 3. It is the story of a homeless family in The Sims 3 created by Robin Burkinshaw, a British web design student. The story follows Alice and her father, Kev. Alice is a loser, unlucky, clumsy, good-hearted and above all miserable. Her father, Kev, is mean-spirited, quick to anger, and inappropriate. He also dislikes children, and he's insane. They live in an abandoned park. Kev and Alice wander around this virtual city, sleeping on benches and digging through garbage bins.

The story attracted a lot of notice, averaging 100 or more comments per post by people who seem to genuinely care about this duo. The response prompted the author to promote charities that support homeless people.[3]

Alice and Kev sleeping on benches 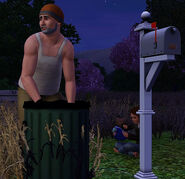 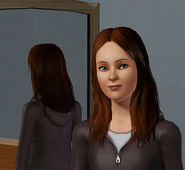