The Placeholder Box is an object in The Sims 2. It does not appear during normal gameplay and can only be spawned with the boolprop testingcheatsenabled code.

When spawned, it takes the form of a yellow-colored box with reddish text that reads "Placeholder" underneath an arrow of a similar color with "+Y" written inside. It is the form that several debugging objects, such as the Scenario Tester, take when spawned. 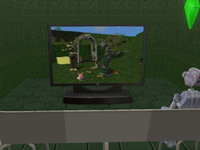 The Placeholder Box on TV