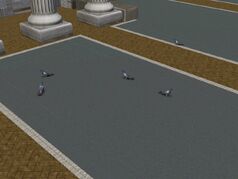 In The Sims 3: Late Night, pigeons are often seen outside the City Hall in Bridgeport, though they do not have a great impact on gameplay, as they cannot be interacted with, and wander around aimlessly.

Pigeons are a common pet in the bird collection in The Sims 3: Pets, although the pigeons outside the Bridgeport City Hall cannot be collected, as they are only considered a special effect by the game.

In The Sims Medieval, pigeons are equivalent to the telephone or email, allowing Sims to contact one another by tying notes to them.

Retrieved from "https://sims.fandom.com/wiki/Pigeon?oldid=695188"
Community content is available under CC-BY-SA unless otherwise noted.