Pierce Shawkti is a pre-made adult Sim, living in Hidden Springs. He has given up being a Ski competitor and former champion since his wife died, since then he has been trying to make his daughter Sidney as happy as he can, but she thinks that now it's time for him to take care of himself. Pierce is employed in the Professional Sports Career and is at level 7. He has 6 skill points in the Athletic skill. He is 13 days away from becoming an Elder. 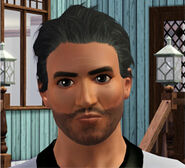 Add an image to this gallery
Retrieved from "https://sims.fandom.com/wiki/Pierce_Shawkti?oldid=862133"
Community content is available under CC-BY-SA unless otherwise noted.