Phil Phantasm is a pre-made male Sim featured in The Sims 2 for console. He lives in The Orbit Room with his roommates Turk Johnson and Jessie Rose. He is an Executive in the Business career. He is also the only Sim with Gold Wants, but it won't unlock a new location. Phil is friends with Noel Howard with a +50 relationship, but sometimes it will drop to 0 after a day.

In the introduction when you first visit The Orbit Room, Phil refers to Turk as his nephew and Turk refers to Phil as his uncle, but in Phil's bio it says they are cousins. This may be an error made in development.[1]

Render from The Sims 2 Prima Guide 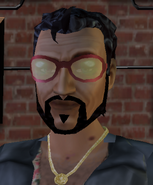 In-Game Icon
Add an image to this gallery

Retrieved from "https://sims.fandom.com/wiki/Phil_Phantasm?oldid=923175"
Community content is available under CC-BY-SA unless otherwise noted.