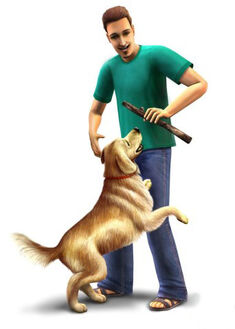 With The Sims: Unleashed, The Sims 2: Pets, The Sims 3: Pets, and The Sims 4: Cats & Dogs Sims can own a variety of pets. Although all games have small pets that Sims can take care of by feeding and cleaning their cage, these expansion packs allow the Sims to have greater interaction with, and customization of their furry loved ones.

Unlike small pets, these pets can befriend Sims, learn skills, and be bred.

In The Sims: Unleashed, Sims get the long-awaited ability to add pets to their families. They can own cats and dogs, both of which are available only in the same small size. Players can add custom skins for pets, and custom meshes allow players to add new breeds. However, since Unleashed did not modify Create a Sim, players cannot create pets when creating a family.

Adopting a pet can help Sims at home, especially if they live alone. Dogs can bring the newspaper in every morning if trained, while cats can chase rabbits and gophers away from a vegetable patch. Pets don't necessarily need to be bought, though; if there are stray cats or dogs wandering around the neighborhood, and if a Sim makes friends with one, it can be adopted for free, although this can take time.

Like human Sims, pets have different motives that will need fulfilling, and each have different personalities. For example, a lazy cat isn't about to do a great deal of wandering around, and an aggressive dog might not like Sims pampering it all day.

Sims can buy cat collars from The Collar Purple and dog collars from the Canine Collar Contraption. To put a collar on a pet, the player will need to select a Sim that has a collar for that type of pet in his or her inventory, then click on the pet. An option to put the collar on the pet will appear.

Cats and dogs have two life stages, kitten/puppy and adult. Adult cats and dogs, like human Sims in The Sims, are ageless and have indefinite life spans.

Cats and dogs can be told to move by using the Go Here interaction, but cannot be told to use objects. A pet's actions cannot be canceled, but pets with at least three points in the Obedience skill can be told to stop what they're doing.

Note
Players with The Sims: House Party or a compilation which includes it should note that dogs and cats cannot use the Anti-Heisenberg Teleporter or objects based on it.

It takes time, but a pet needs to learn what it can and can't do. In the case of a dog, the first step is to teach it not to relieve itself in the house. Wait until the dog has to go (toilet thought bubble), step outside the house, and call it. The dog should come to the Sim and relieve itself outdoors. When this happens, praise the dog and give it a treat, so it knows it did well. If the dog relieves itself inside the house, scold it.

The proper use of "Praise" and "Scold" over time will teach a pet where to relieve its bladder, as well as keeping it out of certain rooms. However, cats will automatically use the litter box as long as there is one.

Fun note: dogs will often help "water" the plants in a vegetable garden. It can't be controlled by the player, but they'll tag along after a Sim while they're weeding and spontaneously make with the watering.

Another way to produce pets is by breeding. Just like Sim babies, puppies and kittens are items. A neglected puppy or kitten will be taken away by Animal Control. It will take three Sim days for the kitten or puppy to mature, and once it does the player will be given the option to keep it or sell it.

To participate in a pet show, take a pet to an Old Town lot and enter the competition. If there's a Judging Station in a lot, a Pet Judge will come up to the player's Sim and ask if they want to enter the competition. Pets are judged according to their skills and their mood at the time, so make sure the pet's needs are taken care of before leaving the house. There are various trophies and ribbons that can be won, which can be taken home and placed on the Pet Award Cabinet.

The Urbz: Sims in the City (DS)

In The Urbz: Sims in the City, pets can be genetically spliced out of amber. By entering the Create A Pet minigame, one of those species will be randomally generated: Triceratops, Unicorn, Veloci-rooster, Jackalope, Dodo, Simosaurus Rex.[1] NPC pets include monkeys, and a parrot.

The pet can be socialized with. The interactions for pets are different than for normal Sims, and are: baby talk, hug, kiss, pet, play, pull tail, rubdown, scold, scratch, and tease. Pets also have three different facial expressions, as opposed to normal Sims, who have nine. The NPC parrot cannot be socialized. Pets can also be told to follow the player.

After creating their first pet, the player is prompted to compete it in The Pet Show minigame, against the pets of Maximillian Moore, Cynthia Braintrust, and Gary Geezer.

The final mission in the game involves controlling the pet, the first time for The Sims series, although no interaction deviating from the script can be done, and walking is the only way the pet is actually controlled.

In The Sims 2: Pets, Sims can have small pets (womrats, birds, and fish), as well as dogs and cats. A Create a Pet feature is now in Create a Sim, so the player can create pets, and can set their personality, as well as their fur color and style. They have their own motives, learned behaviors, and Sims can teach them certain commands. A pet will have its own icon, and can be selected. The player can see the selected pet's action queue, but the icons will be gray and the player cannot cancel any of the actions or control the pet unless cheats are used.

Pets have three life stages: kitten or puppy, adult, and elder. Kittens and puppies are mobile, but must be carried up and down stairs. They can eat from food bowls and get into pet beds without help, and kittens can use litter boxes without help. They cannot have jobs or learn commands, but they can learn behaviors. They cannot get on furniture or Sim beds, but can be praised for not doing those things, and can therefore be taught not to do them.

Like Sims, pets have eight motives that contribute to their overall mood. The Environment motive is replaced with Scratch (cats) and Chew (dogs). Puppies and kittens do not have the Chew or Scratch motives.

Sims can buy pet collars from the Collar Connection Display, but the player must choose whether the collar will be for a large dog, a small dog, or a cat. Once purchased, collars appear to be stored in an equivalent of the household wardrobe that stores the Sims' clothing, so once a collar is purchased for a type of pet, it can be placed on any pet of that type in the household. To put a collar on a pet, or to change or remove a pet's collar, the player will need to click on a mirror, and choose the option to change the pet's appearance. Both the Sim and the pet will go to the mirror, and the player will be able to select any collar that has been purchased for that type of pet. The action will fail if the pet cannot get to the mirror, so the player may need to buy a full-length mirror and place it in an open area, so both the Sim and the pet will be able to get to the mirror. Of course, the mirror can be sold for its full price once the collar is on the pet.

Pets can be adopted by befriending a stray or by using the phone. There are pet stores in the Lots and Houses bin that can be placed in any neighborhood. These stores allow Sims to adopt adult cats and dogs, but not kittens and puppies. Pets can be transferred from one household to another by using the "Propose... Give Pet..." or "Sales... Pet..." interactions.

While pets cannot see ghosts, they react strongly if they sense one.

If there is both a male and female pet of the same species on a Sim's lot and there is a pet house available, a Sim has the option to command a pet to try for puppies/kittens with another pet. If successful, the two pets will go into a pet house and woohoo. Pets can produce a litter of up to 4 puppies or kittens. Players also have the options of keeping a pet's offspring, or selling them.

A complete list of pre-made breeds in The Sims 2: Pets: 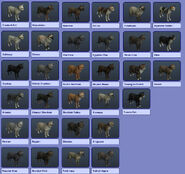 All small dog breeds.
Add an image to this gallery

Differences between Unleashed and The Sims 2: Pets

There are a few differences between pets in Unleashed and in The Sims 2: Pets that players used to Unleashed should be aware of.

Like Sims, pets can die. However, there are not many ways for a pet to die.

Pets in console versions of The Sims 2 Pets cannot die.

Based on the producer's walkthrough of The Sims 3 Pets, pets may also be able to drown along with dying of age. It is however still unknown if pets can starve or burn to death.

Pets are included in The Sims 3: Pets. Players are able to have complete control of the pets, and pets can be made to interact with other pets or their owners or objects around the house. Pets have their own personality and likes, and as the game goes on they can get other traits and have others removed when they learn behaviors from their owner, or when the owner compliments a good action they made.

Players can obtain pets in many ways. The first and most basic way is to create them in Create-A-Pet. Players can choose from 118 dog breeds (72 Large and 46 Small), 46 Cat breeds and 30 horse breeds - all 194 breeds can be seen here. For families created without pets, they can be adopted from both the Animal Shelter and from other families in the neighborhood who have listed an owned pet(s) for adoption. Both of these options cost nothing to the buyer.

If a male and female pet of the same species develop a high enough relationship and there is either a Pet House (Dogs and Cats) or Box Stall (Horses), the Try for Baby option becomes availabe on that species specific Sleeping Item. The same musical chime heard when a Sim becomes pregnant plays if the female pet does so. Pets then go through 3 days of pregnancy. Dogs and Cats produce litters of 2-5 (No more than the maximum household capacity) and Horses only give birth to one Foal at a Time. 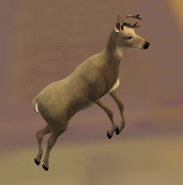 The Sims 3: Pets Create-A-Pet Dog Menu
Add an image to this gallery

In The Sims 4: Cats & Dogs, Sims can create and adopt Cats and Dogs as pets. Unlike the Sims 3, pets in the Sims 4 cannot be controlled by the player.

View past articles · Vote on future Featured Articles · Other Featured Content
Retrieved from "https://sims.fandom.com/wiki/Pet?oldid=781275"
Community content is available under CC-BY-SA unless otherwise noted.