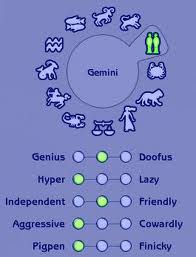 Choosing a pet's personality in The Sims 2: Pets

A pet's personality in The Sims: Unleashed and The Sims 2: Pets is based on a scale of five qualities. The system is similar to that used for Sims, but the qualities differ.

In The Sims: Unleashed, pet personalities use the same zero-to-ten (actually 0 to 10.00) scale that human Sims do. A pet's personality is split into five sections: Quietness, friendliness, playfulness, smartness, and loyalty. Each scale can be split into three roughly equal parts. When clicked on, each trait will show one of three labels, depending on which part of the scale the pet's score in that trait falls into.

When adopting a pet, the pet's personality is set at random. The player has no control over this, though there are third-party programs and hacked objects which allow players to adjust a pet's personality.

In The Sims 2: Pets, a pet's personality is split into 5 categories:

Genius pets get a bonus when learning behaviors and commands, while Doofus pets learn more slowly. In human traits it is playfulness.

Active pets are more likely to be seen running around the house or chasing other animals than lying around. A lazy animal will more likely be seen lying around on beds, furniture, pet beds, etc. In human traits it is activity.

Friendly pets are more likely to interact with Sims or other animals. Independent pets are less likely to do so, and may not always be willing to accept interactions. In human traits, it is outgoingness.

Aggressive pets are more likely to growl and bark when being scolded or when around new people. Cowardly pets won't want to fight and will shy away from new people. In human traits, it is niceness.

Each category has three values, the ones at each end, and an in-the-middle average value. For example, a pet could be Hyper, or Lazy, or somewhere in between, but pets don't get the zero-to-ten scale that human Sims do.

Each sign has the following pre-defined traits for pets:

Retrieved from "https://sims.fandom.com/wiki/Personality_(pet)?oldid=858352"
Community content is available under CC-BY-SA unless otherwise noted.