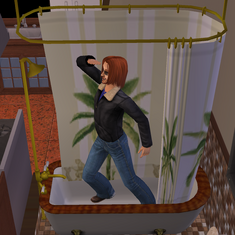 Sims with 8 or more playful points can play in a bathtub.

In both The Sims and The Sims 2, personality is split into 5 sections: niceness, neatness or cleanliness, outgoingness, activeness, and playfulness. It is normally related to a Sim's zodiac sign, but there are exceptions. If a Sim's personality is altered without using cheats, his or her zodiac sign will not change. Also, spore-grown PlantSims[TS2:S] will inherit their spore-parent's personality, but will have a different zodiac sign.

Each section uses a zero-to-ten scale (from a game-mechanics perspective, the scale is actually 0 to 10.00. How fractional points are handled appears to depend on the game, and possibly the scale). In The Sims, each section is split into three parts; 0-2, 3-7, and 8-10, each of which has a name and a description. The descriptions are largely for "color", but do give some hints to the Sim's character. Still, in The Sims, this has relatively little effect on the nature of the Sim. Personality has much more effect on a Sim's nature in The Sims 2. The Sims 2 does not use the labels or descriptions, but personality scales can be divided into low, medium, and high. In The Sims 2, low is generally less than 4 or 5, and high is generally 8 (or 8.01) and above. In The Sims 3, the personality points system was replaced with traits, which was reused in The Sims Medieval and The Sims 4.

In The Sims, children get personality points when they grow up from being babies. There were varying reports as to how (and whether) the parents' personalities affected the child's. Most townies get random personality points, though they may not receive them until they first appear in-game. In The Sims 2, the personality of children born in-game is based on the parents' personalities, though there is a random element involved; twins may have different personalities. It is also affected by how the child was raised as a baby[TS3]. A neglected baby might be more mean-spirited, even if both parents are nice, for example. A baby's personality is not visible in-game, but can be viewed with SimPE. Adopted children and townies always seem to get one of the 12 default personalities in Create a Sim.

Personality can be altered in variety of ways.

In The Sims: Livin' Large, the chemistry set can make a potion that reverses personality points. The only way to get them back would be to recreate the potion. A Sim abducted by aliens would return with an altered personality. Sims can change their personality one point at a time by using the Crystal Ball[TS:LL]. Also, a zombie would have no personality at all.

In The Sims 2, a Sim's older relatives can influence that Sim to gradually change some aspects of his or her personality by using the "Encourage..." interaction. The two Sims do not have to be members of the same household, and the Sim being Encouraged does not have to be selectable. For example, a Sim can Encourage his or her visiting grandchildren. The ability to Encourage is not unlimited; which scales the older relative can influence, and which direction he/she can influence them in, depend on his/her personality. Changing personality this way is very slow; adding or subtracting one personality point requires several "Encourage..." interactions. The effectiveness of an "Encourage..." interaction depends on three factors. One is the younger Sim's relationship with the older. If it is too low, the interaction will fail; otherwise, a higher score will generally produce a larger change. A second factor is the difference between the two Sims' scores on the personality scale in question. The third factor is the age difference between the two Sims. In both cases, the greater the difference, the stronger the effect. Toddlers cannot be Encouraged. Young adults are counted as adults for purposes of the "Encourage..." interaction, so adult parents cannot Encourage their college-student offspring. Sims may occasionally get minor wants to Encourage their offspring in particular directions. Family Sims are more likely to roll these wants, but they may appear for Sims of any aspiration.

With the boolprop testingCheatsEnabled cheat, the player is able to drag a Sim's personality points at will. This will also change the Sim's zodiac sign.

These qualities are sometimes referred to as "traits", but should not be confused with traits as implemented in The Sims 3, The Sims 4, and The Sims Medieval.

In The Sims 2, this score affects how low a Sim's Energy bar needs to be before the Sim can sleep in a bed. The less active a Sim is, the less their energy needs to drop before the Sleep interactions will appear when clicking on a bed.

Personality and skill-building in The Sims 2[]

Personality Descriptions from The Sims[]

Personality Descriptions from The Sims 2[]

With their constant disregard of cleanliness and hygiene, sloppy Sims are content to simply "be." They tend to enjoy just about anything that doesn't require planning or cleaning up on their part.

Tidy Sims typically enjoy cleaning up the house or grooming themselves in front of the mirror. There's always something to be done around the house and they'll more often than not be found doing it; great for the house, but it can tire Sims out.

Introspective and quiet, shy Sims often think about the world around them and write in their diaries rather than actually interact with anyone. It may be harder to break out of their shells, but if shy Sims take the time to get to know others they'll be delighted by the social world awaiting them.

Outgoing Sims are likely to jump headfirst into any situation. Charm and confidence are their best traits and when they're in a friendly mood they enjoy group activities most of all. Keep an eye on these characters, though; outgoing Sims can be too brash, and others aren't always so impressed.

Lazy Sims have been known to veg out on the couch for hours on end, so naturally, they don't need much sleep to sustain their constant lazing. They still enjoy socializing with other Sims and can be persuaded to get out of the house once in awhile.

Active Sims are almost always on the move but need a lot of food and sleep to keep up their hectic pace. They're apt to be the happiest while breaking a sweat, an exhausting idea to most other Sims. An active Sim will usually get more enjoyment from watching sports on TV than reading a book.

Quiet, thoughtful Sims are more inclined to enjoy logic puzzles and good conversation, but they don't respond too well to chaos or silly behavior. Repairing broken items or working on an important project can keep serious Sims content.

Playful Sims are more likely to find entertainment and fun in the world around them; they tend to be more curious than any other Sim. They may have a lighthearted nature, but they can wear themselves out with their antics, as well as get on their fellow Sim's nerves.

Grouchy Sims, despite their sour mood, can still be social creatures. They'll probably enjoy teasing a Sim as much as telling a joke. They don't seem to mind when other Sims overreact and they like playing a game as much as anymore else, but be warned: they tend to be sore losers.

Encouraging and generous, nice Sims tend to be easy to get along with and very positive. They'll listen to what other Sims have to say whether it's interesting or not and clean up after dirty roommates. If they don't watch out though, other Sims may take advantage of their good nature.