Patrizio Monty is a pre-made playable Sim, featured in The Sims 2, The Sims 2 for consoles, and The Sims 3 Store. He is the husband of Isabella Monty, former lover of Contessa Capp, and main rival to Consort Capp.

Patrizio made a comeback in Monte Vista from The Sims 3 Store. He lives with his wife Isabella and his children Bianca and Antonio in Villa Paradiso at 33 Summer Street. His parents, Valentine and Silvia, live on another lot; Poetic Property. He has three acquaintances, of which two are his co-workers. His inventory contains a book, a career journal for his career, and a medical beeper obtained from working in the Medical career. He has 5 skill points in logic and 3 skill points in charisma.

The timeline of Patrizio's rivalry with Consort Capp is altered between The Sims 2 and The Sims 3. In The Sims 2, Patrizio and Consort met each other before they were adults. In fact, Patrizio had previously romanced Contessa as a teenager. In The Sims 3 however, Patrizio is already married to Isabella as an adult, and he has no known relationships to any member of the Capp family, negative or otherwise.

Leading up to The Sims 2 timeframe, Patrizio Monty now lives in the Veronaville neighborhood. Patrizio used to be the best friend and former business partner of Consort Capp. Additionally, Contessa Capp also used to be his romantic interest. After he fell out with Consort during a business deal, they became bitter enemies; Contessa also left Patrizio to marry Consort. Afterwards, Patrizio then went into the culinary business where he met Isabella Pantalone. They later got married and had three children: Bianca, Antonio and Claudio Monty. Later in life, he retired to his llama ranch. After the untimely deaths of Claudio and his wife wife, Patrizio became the primary caretaker of their chidren, Mercutio and Romeo. He is retired at the game's start, and he remains bitter enemies with the Capps. Despite their marriage, Patrizio and Isabella are not in love.

In some game versions[which?], his character file does not contain data on how long he spent in previous life stages, and his age bar will say that he is 9 days old, which actually refers to the number of days he has spent as an elder. Patrizio starts off on his 10th day as an elder. He will die in 2 days without the use of cheats or the Elixir of Life.

According to the storytelling images for the Monty family and Capp family, Patrizio's hair was black before he aged into an elder. However, when taking a glance at his SimDNA with SimPE, he is homozygous for brown hair, which indicates that his hair was dyed black as an adult. Since both of his parents had black hair, it is likely he inherited his brown hair from his maternal grandmother, whose natural hair color was brown.

Patrizio's career history has an odd number of features that are fairly unique to him. Despite his memories showing he retired after Benedick was born, he was promoted to his career three more times after retiring. Additionally, Patrizio doesn't have the skills required to reach the top of the Culinary career. The pension he receives is more than what a retired Celebrity Chef would normally receive. The storytelling images in The Sims 2 show that Patrizio used to be thin, but he put on weight at some point before or after transitioning to elder. Although Patrizio reached to at least level 6 of the Culinary career before he retired, he doesn't have the corresponding career reward available for him to purchase. Consort Capp, Isabella and Antonio Monty also share this quirk.

Patrizio's facial structure in his default headshot is quite different from his facial structure in-game. As an example, his facial structure in-game features a smaller and shorter chin, thicker lips, downward-curved mouth corners, a slightly lower nose, different eye shapes, and eyebrows that are rotated with corners that curve downwards more. This can be proven by changing his appearance in the mirror and then hitting the tick button to refresh his thumbnail. Patrizio shares this inconsistency with a number of other Veronaville Sims: Romeo Monty, Mercutio Monty, Albany, Tybalt, and Hal Capp.

Life leading up to The Sims 2 (console)[]

Patrizio Monty is a pre-made Sim that lives at Cliffside Retreat with his wife Isabella and butler. He is depicted as an elder and wears something similar to what he did in The Sims 2. He is much more frugal when it comes to money and has a worse relationship with his wife. He regrets quitting his job to help his wife with her Bed & Breakfast.

At the start of the game, Patrizio has 2 skill points in cooking. He's friends with Noel Howard, but he is just acquaintances with Isabella, his wife, and Don Treadwell, the Monty family butler.

Patrizio's bio states that Isabella is his wife. However, according to his in-game relationship panel, he isn't married to Isabella. They even have a "Just met" relationship.

Patrizio's appearances in all the game he's appeared in 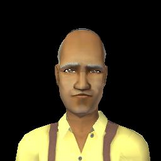