Patrick Jones is a deceased townie buried in Olive Specter's garden. Not much is known about him, since he is deceased before The Sims 2. Patrick's character file contains a portrait where he is an elder. He died due to electrocution.

When Patrick is resurrected, his appearance will be randomized, but he won't have a corrupted face if he changes appearance. If he is aged up or down, he will have the 16th face template which is the one seen in his elder thumbnail. This can be fixed with Dr. Vu's Automated Cosmetic Surgeon.

Even though Patrick's thumbnail shows him with brown eyes, his eyes are actually dark blue. Like several other pre-made deceased Sims in Strangetown, he has no eyebrows. The reason for this is because he has a corrupted face.

According to his age data in SimPE, Patrick was 29 days from being an elder when he died. Oddly if the player tries to open his SimDNA, the page will appear blank. It also may not open at all. Patrick has the hidden Power aspiration and no personality points. When editing in SimPE, his zodiac sign is not recognized.

Patrick as an elder. 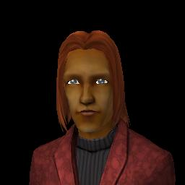 Patrick with his genetic face and eye color. 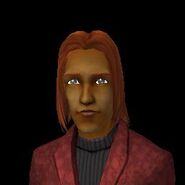 Patrick's intended appearance in The Sims 2 based on the Geometric Data Container in his character files.
Add an image to this gallery

Retrieved from "https://sims.fandom.com/wiki/Patrick_Jones?oldid=909251"
Community content is available under CC-BY-SA unless otherwise noted.