The Parrott family is a pre-made family residing in the neighborhood known as Appaloosa Plains. The family consists of Kanoa Parrott his wife Jazlyn Parrott and their son Ethan Parrott. When first played Jazlyn is pregnant with their second child. Kanoa is shown to be cheating on his wife with two other women in town.

There is also another Parrott family living in Sunlit Tides, consisting of triplets - Clementine, Ramona and Lucretia. The three also have a deceased sister, Beverly. The Appaloosa Plains family bio states that they were from Hawaii, and Sunlit Tides has many similarities to Hawaii; examples include tropical beaches and volcanoes.

Kanoa and Jazlyn Parrott are both mentioned in one of the object descriptions from The Sims 4: Movie Hangout Stuff. 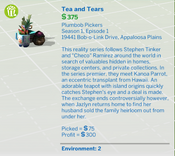 The object description in which Kanoa and Jazlyn are mentioned.
Add an image to this gallery
Retrieved from "https://sims.fandom.com/wiki/Parrott_family?oldid=886843"
Community content is available under CC-BY-SA unless otherwise noted.