The Sims Wiki
Register
Don't have an account?
Sign In
Advertisement
in: Pets, Dogs, Male dogs,
and 9 more
English

Pantoufle Pelly is a poodle who lives with his owner, Imogen Pelly, in Appaloosa Plains. He has light pink fur and wears a purple spiked collar. Pantoufle starts the game with no skills. He only knows Imogen, who he dislikes. He is an adult, with 22 days left until he becomes an elder.

He could be based on the poodle logo from the hotel The Pink Poodle situated on the Gold Coast in Queensland, Australia, which was an iconic well-known hotel back in the 1950s-1970s which was visited by several celebrities and prominent personalities as well as also being known for it's iconic neon pink poodle light advertising the hotel. Today, the hotel is gone but it is still a well known piece of history worldwide with the neon pink poodle light still standing in the same area where the hotel once stood.

Pantoufle - The French word for slipper. 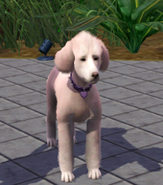