The Pancakes family is a pre-made household featured in Willow Creek, from The Sims 4 base game. It consists of the couple, Bob Pancakes and Eliza Pancakes. The two appeared in the official 'Stay Weirder' trailer[1] for The Sims 4, which featured Bob as the protagonist (described as "the least interesting Sim in the world").

They may be loosely based on the Newbie family from the original The Sims, as in both households the husband is named Bob, while the wives' names (Eliza and Betty) are both derived from the same root name (Elizabeth); furthermore, aspects of their appearances are similar to various PC and console versions of the Newbies. If so, their apparently unhappy marriage may be a reference to the fan theory that developed during The Sims 3, that Betty's ambitions in life suffered as a result of her marriage to Bob.

As of February 2, 2017, an updated version of the Pancakes family can be downloaded through the Gallery from the official Maxis account that introduces Bob and Eliza's son, Iggy.[2] 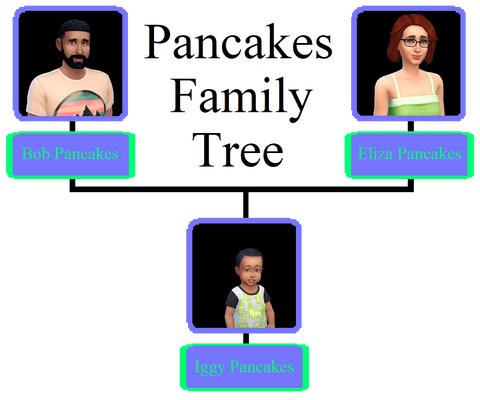 Retrieved from "https://sims.fandom.com/wiki/Pancakes_family?oldid=924940"
Community content is available under CC-BY-SA unless otherwise noted.