Paisley Rainbow is a Sim residing in SimValley. She lives in Casa Caliente with roommate Randy Hart, but they are not involved with each other. She's on the Counter Culture career track and works as a yoga instructor.

Oftentimes Paisley will be found harassing Randy and getting on his nerves, but this is sometimes based on how the player acts when playing as Paisley. They will hate each other much faster than the original speed of decreasing relationships. Sometimes when the player has Paisley treating her roommate with respect their increasing relationship will be a little bit slower than usual due to not being into each other. But when Paisley is in love with Randy she will, believe it or not, do anything to keep him to herself, regardless of others.

She does not attempt to do as many romantic interactions with other Sims, like Randy, as she barely even knows or has just met them. Mostly, if she ever does, her victims will normally be other female Sims, rather than male Sims like what Randy does.

Like Randy's "hippie" outfit, Paisley wears a similar get-up with a cowboy hat. She appears as a southern cowgirl with flirty tastes, though. Instead of a vest, as it is unavailable as a female option, she wears a sports top and casual leggings. 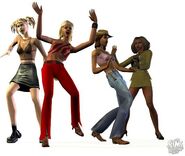 Add an image to this gallery
Retrieved from "https://sims.fandom.com/wiki/Paisley_Rainbow?oldid=915481"
Community content is available under CC-BY-SA unless otherwise noted.