The Sims Wiki
Register
Don't have an account?
Sign In
Advertisement
in: Pets, Pets from Pets (The Sims 2), NPCs,
and 5 more
English

The Pack leader is a wolf that appears in The Sims 2: Pets. He has dark fur and glowing yellow eyes. He comes onto residential lots like any other stray, but only at night (unless cheats are used). Like other strays, he will not appear in college sub-neighborhoods. Pack leaders have various names.

If a high enough relationship is built between a Sim and the wolf, the wolf will "nibble" the Sim and the Sim will become a werewolf. Also, the Sim can accidentally be bitten by the wolf when playing with him.[confirmation needed] Unlike other stray pets, the pack leader can only be adopted with the use of cheats. If that is done, he will turn into a regular wolf. Adopted wolves and dogs can mate with a pack leader if their relationship is high enough, but their offspring will not have glowing eyes or the ability to turn Sims into werewolves. The personality of most offspring of pack leaders will be much like that of a wolf - genius, hyper, independent, aggressive, and halfway between finicky and pigpen. 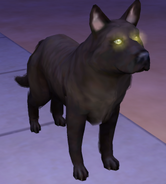