The Ottomas family is a pre-made family available with The Sims 2: Seasons. After Seasons is installed, they appear in the family bin for all neighborhoods. The family consists of six Sims; Dora, Peter, Samantha, David, Sharla, and Tommy Ottomas. Dora is Peter's mother, and Peter is married to Samantha. They have three children; David, Sharla, and Tommy. At the start of the game, Samantha is pregnant with twins. Character files of Ottomas family members can be found in every neighborhood of The Sims Castaway Stories using SimPe. 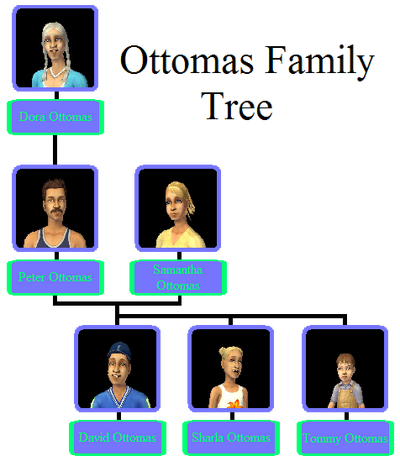 There is a known bug in the game that gives the twins a random father (and in some cases, a second biological mother) instead of listing Peter as the father. Their father is always a random Sim. It could be a townie, an NPC (e.g. the Repo-man or Grim Reaper), a child, a woman, or even a pet. This is addressed in the Seasons patch, but the patch will only fix instances of the family that are not yet loaded to the Neighborhood Family bin, haven't been moved in to the neighborhood, or the Neighborhood itself hasn't added the Weather secret sub-neighborhood. Also, sometimes the twins look deformed or come out with no eyes or nose or even other body parts. If the bug is left unattended, it may eventually cause neighborhood corruption, requiring the player to reset the neighborhood.

Retrieved from "https://sims.fandom.com/wiki/Ottomas_family?oldid=611020"
Community content is available under CC-BY-SA unless otherwise noted.