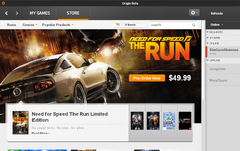 Snapshot of the Origin storefront.

Origin (formerly known as EA Download Manager or EADM) is the digital distribution service developed by EA. Origin is used to download and install digital versions of purchased games as well as their updates. Origin is the chief competitor to Valve's Steam content distribution service. Origin has been a mandatory requirement for all EA titles released since 2011.

The EA Store and EADM client were merged and re-branded as Origin in June 2011.

Comparisons and differences between Origin and Steam Edit

Relation to The Sims series Edit

The Sims 4 is the first title in the series to require Origin for installation, although the game can be played without it afterwards.[1] The service is used for updates and distribution of downloadable content.

There is a page on Wikipedia dedicated to this real-world topic. Click here to view this article's associated Wikipedia page.

Retrieved from "https://sims.fandom.com/wiki/Origin?oldid=885176"
Community content is available under CC-BY-SA unless otherwise noted.