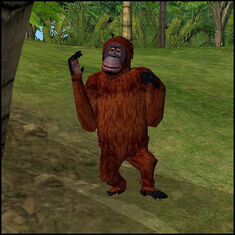 Orangutans are a type of animal found in The Sims Castaway Stories. They can be found on every community lot, usually in groups. If a Sim gains enough relationship points with the orangutan, he or she can adopt it. Unlike cats and dogs, the orangutan is fully controllable.

Orangutans have all Sim needs, except Environment and Hygiene. They also have only three skills: logic, body and creativity. An orangutan can get a job. In order to get an promotion they have to learn skills and have a good job performance, much like Sims.

Orangutans only have one lifestage and never die. The only way to remove them from a household is by evicting family members including the orangutan from the lot. All orangutans found in-game are female. Males might have been intentionally left out to cover the fact that orangutans can't breed nor have offspring.