Olivia Monty (née Dottore) is one of the pre-made, yet unplayable Sims featured in The Sims 2. She was the only child of Holofernes and Judith Dottore, the wife of Claudio Monty (who is also deceased), and the mother of Romeo and Mercutio Monty.

During her lifetime, Olivia lived in Veronaville, one of the neighborhoods that shipped with the game. She was married to Claudio Monty. She potty trained her son Mercutio when he was a toddler, but didn't teach Romeo any toddler skills. While she was pregnant with her third child,[1] she died.

Olivia's biography hints that her death could have been a result of being pushed to the edge, possibly from childbirth complications. However, that death type is not possible in-game, being listed as starvation instead.

Originally, she was probably meant to be playable, as she has both personality points and biography but strangely, no memories. This also applies to her husband and Contessa Capp. Another hint towards this is her nephew Benedick and niece Beatrice recognize her as their aunt and vice-versa, which is impossible without editing, as she is a relative by marriage, and it only happens with pre-made living Sims. She was also created with the rest of her living family,[2] and has grandparents in her family tree, unlike most pre-made dead Sims.

Her character file contains her elder thumbnail. Her appearance is basically the same, but she has grey hair and another outfit. According to SimPE, she was 25 days from being an elder when she died.

Olivia is a main character in the play Twelfth Night. 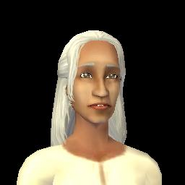 Olivia Monty as an elder.

Retrieved from "https://sims.fandom.com/wiki/Olivia_Monty?oldid=927643"
Community content is available under CC-BY-SA unless otherwise noted.