The Sims Wiki
Register
Don't have an account?
Sign In
Advertisement
in: Worlds in The Sims 3, Into the Future
English 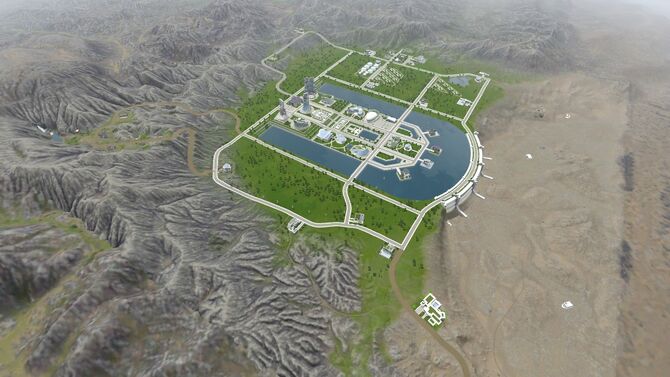 Oasis Landing is a futuristic sub-world that was shipped with The Sims 3: Into the Future. It is set in the distant future, relative to other worlds in The Sims series. Sims can engineer children, something that is not possible anywhere else. They can buy (or build) a Plumbot, or sell one to the masses, set up a digiblast display, or even buy new high-tech stuff from the imports gallery.

Unlike other sub-worlds in The Sims 3, Sims are able to stay in Oasis Landing indefinitely.[1]

There are three types of Oasis Landing: normal, utopian and dystopian.[2] The player starts out in the normal future, but can alter it to a utopian or dystopian future by tampering with certain aspects of life in the present.

Like several other worlds, Oasis Landing contains various references to real world culture, in this case mainly science-fiction themed media. For example, Fryderyk Rama, Lilah Turni, and Bend0 are parodies of Philip J. Fry, Turanga Leela, and Bender respectively from the animated sitcom Futurama. Chelsea Gateway and Gladys are a spoof of Chell and GLaDOS from the Portal series, while the Mere-Wilkins family is a parody of the Doctor's married Companions Amy Pond and Rory Williams, along with their daughter Melody Pond, and the homeless Sims Samantha Loo and Colby Texas are references to the characters Leeloo and Korben Dallas from The Fifth Element. Another homeless Sim, Martin McFleet, is a reference to the character Marty McFly from the Back to the Future series. Other families that reference popular culture include the Bannister family, who appear to be a parody of House Lannister from A Song of Ice and Fire series, the Castle family, who appear to be a parody of the main family in Castle, the Dunes, who are a reference to the Fremen from the Frank Herbert's Dune series, and the Planesons, who are a parody of the Jetson family from the animated sitcom The Jetsons.

There are also several references to The Hunger Games. The architecture of the town, as well as the fashions of many of the characters who live in it, seems to have been inspired by The Capitol in The Hunger Games series, particularly the movies. The Mannins are a reference to the types of families living in District 12, and incidentally, the description states that they moved to the Mining District, which happens to be District 12's main industry.

There are 20 pre-made families in Oasis Landing; however, they are unplayable at the start without asking or being asked to move in. Also, some will usually be replaced with <last name>'s Descendants household.

§50,000
Difficulty: 3
Susan Castle, Nathaniel Castle, Lexi Castle, Vroombo
Three generations living under one roof! Susan raised Nathaniel to be himself, and the quirks only multiplied by Lexi.

§50,000
Difficulty: 2
Fryderyk Rama, Lilah Turni, Bend0
These three roommates once worked together delivering packages, but now they're exploring anything the universe has to offer them.

§50,000
Difficulty: 2
Chelsea Gateway, Gladys
Since Chelsea was an infant, she's tormented her Plumbot, Gladys, with ingenious pranks. Gladys is fed up with this arrangement.

§50,000
Difficulty: 2
Drake Chambers, Harkin Shire, Kel Gwyn
There's a lot of history between these three, but they're grown-up enough to make things work as roommates...right?

§50,000
Difficulty: 3
Valerie Mannin, Connell Mannin, Brigitte Mannin, Gilon Mannin
The Mannins moved to the Mining District so that when the apocalypse happened, they'd be halfway to the wilderness already.

§50,000
Difficulty: 1
Bennett Obi
Bennet Obi has lived alone for decades in a ramshackle hut. His eccentricity conceals deep reservoirs of strength and wisdom.

§50,000
Difficulty: 3
Janet Planeson, Gregor Planeson, Judith Planeson, Roy Planeson, Daisy
The Planesons are a family fully committed to Oasis Landing's many conveniences. Their Plumbot Daisy does most of the work.

§50,000
Difficulty: 2
Ziron, Drox, Lyra
Set up by curious scientists, this Plumbot household is led by the sentient Ziron and its siblings, Drox and Lyra!

§50,000
Difficulty: 3
Neel Das, Dot, ROB-E, Takk0
Neel spends all day and every night holed up in his Bot Workshop. Will he ever see daylight again?

§50,000
Difficulty: 2
Planchette Spector, 5P1R17
A Sim brought back from the afterlife, Planchette is the last of the known Spector clan on Earth. The mystery of the locked door brought him to town.

§50,000
Difficulty: 2
Maria Russo, Serena Russo, BitBot
Nervous about granddaughter Serena living into the big city, Maria moved in to help. Can she adjust to newfangled technology?

§50,000
Difficulty: 2
Atom Beaker, Ceres Beaker, Cyclotron
A scientific experiment transported the Beaker twins to the Future from their home in Strangetown. They love the Future and its scientific possibilities.

Oasis Landing from above

Dried up ocean with wrecked houseboat 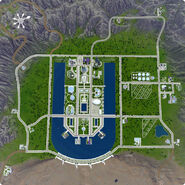