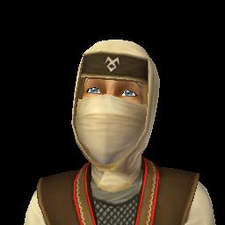 Headshot of a Ninja from Takemizu Village.

The ninja is an NPC from The Sims 2: Bon Voyage. He only visits Takemizu Village or custom far-east vacation destination lots. Sims can learn teleportation from him.

In Takemizu Village or custom far-east vacation destinations, a ninja NPC may randomly teleport into the lot. He'll hop around for a little while, teleporting, and if a Sim clicks on him the only option is "Learn to Teleport." If the player chooses this, the ninja will ask a question with two answers. This question works like a chance card, where each answer has a chance of being correct or incorrect. If the answer is correct, the Sim will permanently gain the ability to teleport.

After correctly answering the ninja's question, the option "Teleport Here" will be added to the menu that appears when clicking on the ground. When this is selected, the Sim will back-flip into a puff of smoke and reappear over the destination. As with teleportation via Magivestium,[TS2:AL] this will surprise Sims who are standing around when it happens.

Ninja-style teleportation is faster than walking, but has the same limitations; it does not allow Sims to teleport to locations that are not accessible via walking. For example, if a room has no doors or a fenced area has no gates, it cannot be teleported into. This also applies to doors that the teleporting Sim cannot simply walk through, such as the Very Mysterious Shelving[TS2:AL] or opposite-gender doors. A mod which allows ninja-style teleportation to inaccessible areas has been made.

As with all teleportation in The Sims 2, ninja-style teleportation does not allow access to other Sims' dormitory rooms, suites in hotels, or apartment slots.

Warning
DO NOT, under any circumstances, attempt to add a ninja to a family, try to turn them into a supernatural creature, such as a vampire, a werewolf or a witch, make them selectable, or tamper with them in SimPE in any way or form. Doing so will corrupt the neighborhood they are in.

Retrieved from "https://sims.fandom.com/wiki/Ninja?oldid=902408"
Community content is available under CC-BY-SA unless otherwise noted.