Night Wraith is an NPC that will stalk and scare any spellcaster who has the Curse of the Night Wraith. He is always feeling very sad, and cannot be interacted with normally. However, players can get around this restriction by removing the curse and then reloading the lot. If Sims are cursed again, a new Night Wraith will be generated.

He has three traits that are always present: evil, mean and dastardly (from his aspiration). His fourth one is randomly chosen, and he may sometimes spawn with more. He also has a set reputation, which is unusual for Sims who are not made for The Sims 4: Get Famous.

He has a white skin tone normally, but his Curse of Repulsiveness turns his skin green in-game and covers him in warts.

Night Wraith has a unique hidden trait which can be given to other Sims via cheats. This will result in them having similar visual effects as him (such as lightning coming from their eyes) and being perpetually sad. The unusually powerful sad mood can only be overridden by making Sims possessed[TS4:SV]; making them feel fine with vampire perks[TS4:V]; using cheats to make them enraged, mortified or hysterical; or using mods.

Sims with the Night Wraith trait will also have a unique cause of death, simply named "Night Wraith". 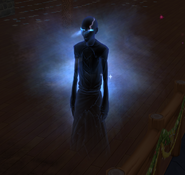 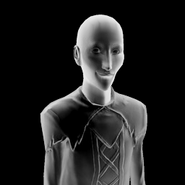 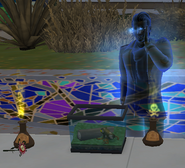 A sim with the night wraith trait added through cheats.

A toddler with the Night Wraith trait added through cheats.
Add an image to this gallery
Retrieved from "https://sims.fandom.com/wiki/Night_Wraith?oldid=917586"
Community content is available under CC-BY-SA unless otherwise noted.