The Newbie family is a pre-made family that appears in most games in The Sims series. The family name is a pun of "newbie", which means a newcomer or novice. This is a reference since they are commonly used as a tutorial family, most notably in The Sims. The family name is also a placeholder name in most console games when players create a Sim, which is usually Chris Newbie.

The Newbie family lives at 509 Farmer Valley Road in Riverview, a downloadable town for The Sims 3. The family includes Robert and Mags Newbie, and their teen son Bob. The Newbies are new in town, and they don't appear as a tutorial family in this neighborhood.

The Newbies' house is small but rather fashionably decorated, though they only have §2,000 in their household funds. They also have a swimming pool and an expensive car. This will usually mean that when the first lot of household bills arrives on the second in-game day, before Robert and Mags have been to work for the first time, the bills will take up over half of their small savings. This apparent over-spending may explain why the Newbie family are not very well off in future games, despite seeming to be in a good financial situation at the moment.

The Newbie family, consisting of Bob and Betty Newbie (née Simovich), lives at 7 Sim Lane in The Sims. In this game, the Newbies are used as a tutorial family. This tutorial must be completed before the Newbie family can be played.

In The Sims 2, the Newbies are no longer playable, as they are already deceased. Their only daughter, Brandi Broke, and their grandchildren Dustin, Beau, and the unborn baby Broke are the descendant of the Newbies, and are now known as the Broke family in Pleasantview. Bob and Betty only appear in Brandi's family tree.

As of February 15, 2019, an official recreation by Maxis of The Sims 2: Pets console version of the Newbie family in The Sims 4 can be found in the Gallery.[1]

If the player does not have The Sims 4: Cats & Dogs, Buddy is absent from the family as this expansion pack is needed in order to have dogs. The family description also has the part "with their dog Buddy" removed. Other pack specific content is changed as well if the player lacks the required packs.

Newbie: "a newcomer or novice, an inexperienced user of computers in general." A reference to the fact they are the tutorial family in several games.
Bob: Short for Robert, meaning "bright fame."
Betty: Short for Elizabeth, meaning "my god is oath."
Brandi: May refer to brandy, the alcoholic drink; possibly a feminine version of Brandon, which originates from the English place name.
Mags: Short for Margaret, meaning "pearl".
Buddy: Means "friend", and is therefore a popular name for dogs.

The Newbie family is the one used in The Sims by "novice and inexperienced" players. When the player first begins the game, they are prompted to go to the Newbie household. Bob's name suits him, seeing as he is famous in the sense that all Sims players are aware of him. 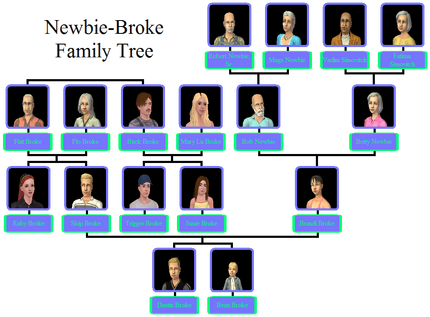 The Newbies move in.

The Newbies kissing each other.

The Newbies as seen in Asian versions of The Sims.
Add an image to this gallery

Retrieved from "https://sims.fandom.com/wiki/Newbie_family?oldid=906854"
Community content is available under CC-BY-SA unless otherwise noted.