Neil LeTourneau is one of the pre-made firefighters in The Sims 2 who resides in Pleasantview and custom neighborhoods. The other two firefighters are Maura Simpson and Mitch Lawson. Neil can be made playable by befriending and asking him to move in, or by marrying him.

When he appears in custom neighborhoods, his personality, interests, and skills will be different from the ones he has in Pleasantview, seen below. Neil has the same facial structure as Stephan Gothier. 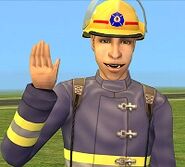 Retrieved from "https://sims.fandom.com/wiki/Neil_LeTourneau?oldid=829120"
Community content is available under CC-BY-SA unless otherwise noted.