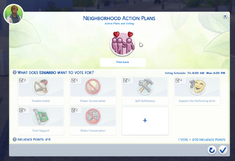 Neighborhood action plans (often abbreviated as N.A.P.) is a game feature introduced with The Sims 4: Eco Lifestyle. They are a series of new rules or regulations enforced upon a particular neighborhood in the game, enacted through community voting. These votes committed for the particular neighborhood come from and can only be declared by citizens of the world it's in. Some N.A.P.s are there to help improve or worsen the eco footprint of the neighborhood, whilst others may restrict Sim's leisure activities or change their behaviors. Up to four N.A.P.s can be active at the same time.

From Friday 8AM to Monday 6PM each week, Sims will be able to vote for an array of neighborhood action plans. Votes for N.A.P.s can be submitted at the community voting board (found in a community lot) or the mailboxes of the residents. Sims start off with one influence point but gain more by asking others to help sign to benefit from more votes. The community will also vote for their own action plans and have a chance to win over the player's chosen action plan. One vote costs 10 influence points, the more influence points a Sim has, the more votes they can cast on their chosen N.A.P. Sims can also repeal an existing N.A.P. the same way as voting for one. Only Sims living in the same neighborhood are allowed to vote a N.A.P. for that neighborhood.

At the end of the voting period, the N.A.P. with the most votes will be enacted or repealed. Sims can distribute their influence points over any number of N.A.P.s - they are not restricted to using them all on one N.A.P. In the game options menu, the player can also turn off their neighbors autonomously voting for N.A.P.s, meaning that only the player can initiate the voting process. Without this, various N.A.P.s can be enabled without any intervention from the player.

Sims will be able to also view the neighborhood action plans from their Simology panels to see when they are open as well as opening hours, see their influence points, and currently voted action plan.

Retrieved from "https://sims.fandom.com/wiki/Neighborhood_action_plan?oldid=924643"
Community content is available under CC-BY-SA unless otherwise noted.