Ned Whalen is a Sim who appears in several trailers and other promotional material for The Sims 4. He was created by SimGuruZephyr and can be found in the Gallery.[1]

Ned has the same facial features as Travis Scott but they dress differently.

In the "Holding Grudges" trailer, Ned can be seen attempting to launch his Rocket Ship but his effort is sabotaged by Andre DaSilva who plays a prank on him.[2] Ned later succeeds and in the Official Launch Trailer for Get to Work he can be seen exploring Sixam where he meets Aileen Rauvu and they fall in love.[3] In a Get to Work render he is seen pregnant with Aileen's child.

Ned is also a skilled gardener who is very fond of his Cow Plant. In the "Cow Plant Love" trailer, he attempts to steal its cake and is eaten by the Cow Plant. Later, he is spit out again and covered in green goo. [4]

In the launch trailer of the release of the game he seem to be rejected by all the woman he try to flirt with but after modify a bit his body a green woman fall in love with him and the both are seen kissing each other. [5]

Aileen and Ned fall in love 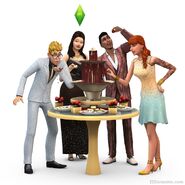 Ned pregnant with Aileen's child
Add an image to this gallery

Retrieved from "https://sims.fandom.com/wiki/Ned_Whalen?oldid=909297"
Community content is available under CC-BY-SA unless otherwise noted.