Naomi Foye is a Sim who made her first appearance in The Sims 4: Get to Work. She appears in several trailers and other merchandise for the game and can be found in the Gallery from the official Maxis EA Account ID.[1]

Naomi appears in many trailers and renders of Get to Work. She also appears on the box art of the expansion pack with Sierra Moss and Scrubs De Reve.

She plays the boutique owner in the trailers and the renders.

Oddly for a young adult, her hair is prematurely greying.

Naomi on the cover

Naomi with the unlockable top she wears in promotional images 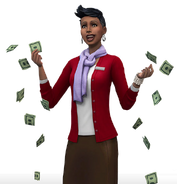 Retrieved from "https://sims.fandom.com/wiki/Naomi_Foye?oldid=910115"
Community content is available under CC-BY-SA unless otherwise noted.