The Sims Wiki
Register
Don't have an account?
Sign In
Advertisement
in: Sims, Female Sims, Adults,
and 35 more
English

For other Sims with the same name, see Nancy Landgraab (disambiguation).

Nancy Landgraab is a pre-made, playable Sim, residing in both Sunset Valley in The Sims 3 and Oasis Springs in The Sims 4. In both the main timeline and alternate timeline, Geoffrey Landgraab is Nancy's husband and they have a son named Malcolm. She is also the head of the Landgraab family.

Nancy is a descendant of the wealthy Landgraab family which built the town of Sunset Valley. Her husband is Geoffrey, who took her last name when they married, and they have one child, Malcolm Landgraab. The family resides in their stately mansion at 10 Summer Hill Court and have apparently lived there for a long time.

Her parents are Chester and Queenie Landgraab. Chester died of old age as an elder, however her mother Queenie died of a fire as a young adult when Nancy was young. Both of her grandparents, Kitty and Kermit died of old age and are buried in Pleasant Rest Graveyard.

When the family is first played, Nancy is 16 days from being an elder. She's enemies with most of the Altos, except Holly.

Nancy shares many similarities with her mother including their hairstyle, their blonde hair, two traits (ambitious and snob), they both wear make-up, have the same beauty mark, dress, and both wear earrings.

Both Nick Alto and Nancy are vice-presidents in the business career, and they start off as two ambitious workaholics in a tough competition to become the next CEO (in the beginning of the game, Gunther Goth is the CEO). However, their rivalry hurts both their careers, as it lowers one of the metrics for promotion, "relationship with coworkers." In some games, Nick is Nancy's boss, and/or vice versa, though they always have the same job position.

She will often become a CEO in the business career, fulfilling her lifetime wish, if story progression is turned on.

There is an account on Twitter (@NancyLandgraab2). It is a role playing account for Nancy Landgraab and was one of many accounts that popped up during the "Sims Revolution". It follows Nancy Landgraab in a fan based storyline for her.

Nancy returns with her husband and son, and resides in Oasis Springs as a part of the alternate timeline. She is an adult who is 18 days away from becoming an elder. She works as a minor crimelord in the criminal career track and has the Fabulously Wealthy aspiration. She has four skill points in charisma, one in comedy, three in fitness, and two in programming. She is sweethearts with Geoffrey and friends with Malcolm and does not have relationships outside her family.

According to the interactive map of San Myshuno, as a young woman she toyed with the idea of becoming an artist, and lived for several years in the Arts Quarter, before settling into her current career and lifestyle.

Nancy in Create a Sim 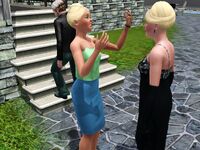 Nancy Landgraab talking with her mother. 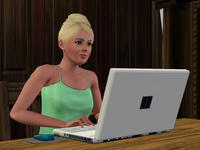 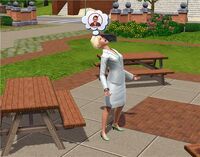 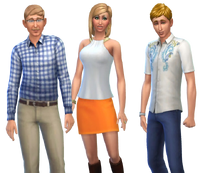 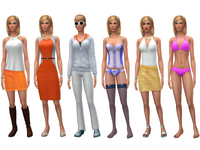