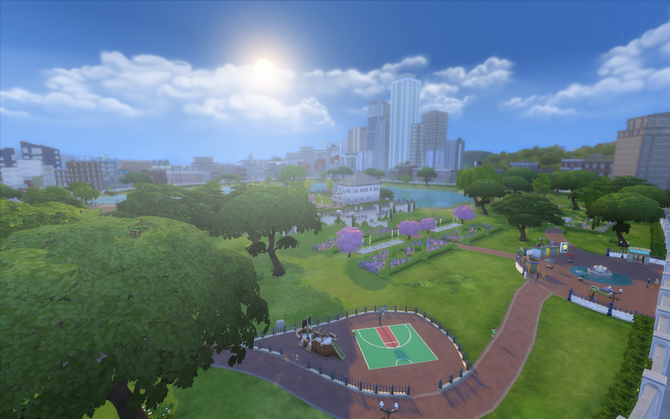 Myshuno Meadows is a neighborhood in San Myshuno in The Sims 4: City Living. The neighborhood contains one special 64x64 central park. Around the central park, there are multiple paths Sims can explore, a small area with a playground and a basketball hoop, a pond with a fishing spot, and an area in front of the park with various food stalls and seating. The area is located next to a huge lake and contains a lot of different collectibles such as frogs, snow globes and city posters.

The park lot itself contains a house with a bar, a kitchen, bathrooms, and seating across downstairs and upstairs. Outside there is a wedding arch with seats and a piano, making the park a perfect place to have a wedding.

Myshuno Meadows also used to be owned by a Sim named Barnabas Skye, whose mansion that stood here burned down, with the observatory being the only one remaining. It is mostly unknown who Barnabas Skye was other than for being a scientist, and what he possibly could have done.

In gameplay, Myshuno Meadows includes six historical plaques that tell abut the history and lore of the surrounding area and San Myshuno.

"This Park was once the estate of scientist and herring baron Barnabas Skye. After his mansion was gutted by fire, the fish mogul gifted his extensive gardens to the people on the provison that his personal Observatory remain standing and free of use to any budding astronomer living in the city. To this day the telescope is maintained and updated by the Barnabassian Scientific Society."

"On this spot the Llama Freedom Movement was born. A simple protest, known as the Llamoid Sit-In, shocked the public with its extreme use of acoustic guitars, hair flowers and slightly tuneless singing. Though many years have passed since that day, the spirit of activism remains alive and well, and will continue until all Llamas are free to strut and spit and neck wrestle to their heart’s content. (Plaque paid for by the Llamean Popular People’s Front)"

"This plaque commemorates the Shirt Factory Meteor Strike And Subsequent Big Lizard Incident that razed the Fashion District to ash. Like a phoenix reborn, the District has risen from this disaster to become an exemplar of regeneration, with award winning modern architecture and a vibrant festival scene."

"This Plaque was erected to mark 150 years of fishery in our fine city. From the humble kedgeree peddlers of the gold rush era to the mighty height of the Canning Industry, the noble Spangled Herring (Clupea Pallasii Fabulousa) has been the slippery, silvery key to the fortunes of this city. As we step into a bold new century, let us not forget the bounty of the sea, nor the piscine origins of our metropolis."

"Raised in memory of the Open Street Act, legislation which allowed communities of all cultures to organize celebrations in the streets. The progressive vision of our founding fathers has allowed generations of residents enjoy the many delights that ‘Festival City’ has to offer. (Plaque donated by DynaSign Co. ‘If it’s in the streets, it’s on our Signs’ (TM))"

Add an image to this gallery
Retrieved from "https://sims.fandom.com/wiki/Myshuno_Meadows?oldid=876448"
Community content is available under CC-BY-SA unless otherwise noted.