Music is a notable feature in The Sims (2000), as well as its expansion packs. Music is available in build and buy modes, while viewing the neighborhood or while in Create a Sim, and in Live mode over a Stereo, over wall-mounted music speakers on community lots or through instruments played by Sims.

Most of the music for The Sims and expansions was not produced by "notable" musicians, as opposed to much of the music in The Sims 2 and The Sims 3, especially Live mode music, which is often Simlish-converted versions of real-life commercially produced music. During development, a number of musicians or composers were hired on to create and record the music ultimately heard in-game.

Jerry Martin is an American music composer. He was the Lead Composer and Studio Audio Director for The Sims, and composed much of the music found in those games. He worked for Maxis from 1996 to 2004, and also composed music for other Maxis and EA projects, including SimCity 3000 and SimCity 4.

Prior to joining Maxis, he composed music for video soundtracks and national television commercials; he has worked with over 90 companies and has been commissioned for over 200 works from major companies in the United States.

After departing Maxis in 2004, he started Jerry Martin Music, where he continues to work on music projects.

Marc Russo is an American music composer and saxophonist. He began a musical career in the late 1970s, ultimately becoming a part of the contemporary jazz group Yellowjackets. Russo left the group in the 1990s, choosing to work on commercial projects, including the composition of several tracks for The Sims and its expansions. He currently tours with The Doobie Brothers, an American rock band. 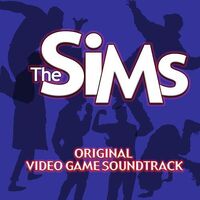 The Sims Original Video Game Soundtrack is the official soundtrack to The Sims. It was released in 2007 as an official digital soundtrack on Amazon; the soundtrack is now also available to purchase on iTunes. The soundtrack features 15 of the 37 songs included in the original The Sims. Most of the songs are instrumental only, though some do contain lyrics in Simlish.

Retrieved from "https://sims.fandom.com/wiki/Music_in_The_Sims?oldid=800222"
Community content is available under CC-BY-SA unless otherwise noted.