The Sims Wiki
Register
Don't have an account?
Sign In
Advertisement
in: Sims, Male Sims, Adults,
and 15 more
English

Murray Barrett is a pre-made playable adult Sim from Wanmami Island, one of the neighborhoods shipped with The Sims Castaway Stories. He and his wife Morag Barrett are castaways who live together in the Wreck of the Redsnout. His exceptional lack of navigation skills marooned them on the island. The Barrett couple has been here for a long time and rumors even imply that it was Murray himself who unintentionally named the island. Both Murray and Morag love to dress up.

Murray has the Fortune aspiration and the Gemini zodiac sign. As far as personality goes, Murray is quite outgoing and active, but also quite sloppy and grouchy. He has no skill points. His main interests are Weather, Food and Environment. 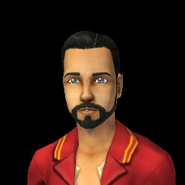