The Sims Wiki
Register
Don't have an account?
Sign In
Advertisement
in: Life states, World Adventures, Mummies,
and 2 more
English 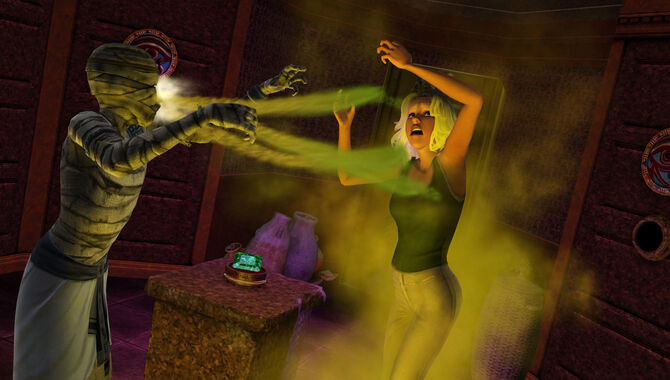 Mummy
A life state · Featured in:

A Mummy in The Sims 3: World Adventures

Not to be confused with Someone's Mummy.

The Mummy is a life state that was originally introduced in The Sims: Makin' Magic as an NPC called Someone's Mummy, but is playable in The Sims 3: World Adventures. Mummies also appear as an NPC in The Sims 2 (Nintendo DS), The Sims 2 (GBA) and The Sims FreePlay.

In many ways, Mummies in The Sims 3: World Adventures resemble zombies from The Sims 2. Normally, mummies are NPCs, though playable mummies can be summoned from canopic jars or a regular Sim can be turned into a playable Mummy by sleeping in the Cursed Sarcophagus of the Kings. In The Sims 3: Supernatural, Sims can mix or buy the Bottled Mummy's Curse to turn either themselves or another Sim into a mummy.

A playable mummy will be treated as an elder by the game if it was summoned using canopic jars, though Sims who were transformed into mummies while sleeping in the Cursed Sarcophagus of the Kings will retain their original age. Mummies enjoy longer lives than normal Sims and do not have the energy or bladder needs. Mummies are much stronger than a normal Sim; they're able to fend off the attack of the zombie bear when exploring the catacombs at the graveyard, and have a better chance of winning a fight (they won't ever get fought by other mummies, though). They're also immune to electricity; whether they get shocked by an electric trap or while upgrading an item, they suffer no harm, which makes them excellent repairmen. If a burglar sees a mummy, they will immediately run off.

The gender of a mummy is shown on the personality page. However, they are unable to reproduce. Mummies also have several special conversation topics. Outside of these differences, a mummy can be controlled like any normal Sim.

To give an example of their longer lives, on the normal lifespan setting, they have more than 100 days before aging up from the young adult stage to the adult life stage.

Mummies are the slowest life state, and thus will limp from location to location.[1] Often, this can lead to mummified Sims missing work or failing time-based events, but this disadvantage can be partially bypassed with the hoverboard or Fairy Dust.

Mummies are also covered in old, flammable rags. Thus, the mummy Sims will receive the 'Scared' Moodlet whenever they are in the same room as a lit fireplace, and will "quickly" move to put it out. Catching fire can be avoided by either getting a Sim to take Fireproof Homestead (Ambitions) as a Lifetime Reward or getting soaked in showers and diving wells. Every time they get in contact with water, they get soaked, so their leaving puddles around the house will be inevitable.

When non-mummy Sims (including SimBots) see a mummy, they will interrupt what they were doing (the whole action queue) and get scared/excited (depending on personality and traits), much like Sims' reactions to Bonehilda. They won't be able to get back to do what they were doing by themselves.

Mummies are unable to be recolored without using mods.

As mentioned before, unless mods are used, mummified Sims are unable to get pregnant or impregnate other Sims.

To reverse the mummy state and become a normal Sim again, simply have a mummy sleep in the Blessed Sarcophagus of the Kings for a day or so, or get a snake from a snake charming basket to kiss you by playing for a long time after you buy a cobra. When the Sim emerges, they will no longer be a mummy. Both Sarcophagi can be "bought" in buy mode under the category with a question mark with the "buydebug" cheat on.

Ghost Sims can also become mummies. Other Sims will react to a ghost Sim who has been mummified as if that Sim was a mummy, rather than react to them being a ghost. Being a ghost and a mummy, does not, however, make the Sim fireproof. When a mummy ghost catches on fire from a fireplace or fire pit, they remain on fire. Since ghosts cannot die, they will stand in place pointlessly trying to put themselves out, until another Sim puts them out, they jump in a well or use a Shower in a Can, or the player uses cheats to put out the fire.

In The Sims 3: Supernatural, Sims can mix or buy the Bottled Mummy's Curse to turn either themselves or another Sim into a mummy.

Adding a Mummy to the Household[]

As mentioned before, players can add their very own mummy to their Sims' home. To do so, they will need to acquire all 5 pieces of any sarcophagus, construct it, complete the Canopic Jars relic collection, and put the 5 types of Canopic Jars in your Sim's inventory. After they click on the sarcophagus and choose the option "summon mummy", the jars will be consumed, but a mummy will emerge and be added to the household! Mummies are elderly Sims and can get jobs, gain skills, and even fall in love. Players just have to remember to fire-proof the home!

An NPC mummy will normally be inside their sarcophagus resting. However, if a Sim looks inside the sarcophagus or steals a treasure in the mummy's chamber, they will awaken and pick a fight with the Sim that is treasure hunting. If the Sim loses the fight, they may become cursed. However, a fight can be avoided by simply leaving the room where the mummy's sarcophagus is, as the mummy is unable to leave the room. If the mummy loses the fight, they will disappear in a cloud of dust.

If the Sim happens to have a Mummy Snack in their inventory, the mummy will automatically remove it and return to their sarcophagus until they are disturbed again. A mummy can be defeated if a Sim has sufficient Athletics and Martial Arts skill, which can be trained in Shang Simla, or in museums with martial art items, such as France.

As mummies are vulnerable to fire, they can be tricked onto hidden fire traps, incinerating them. Witch can also cast fire blast spell on the ground, then move to another room waiting for the fire to spread and consume the mummy.

Though cheat-y, the most effective way is using the testingcheatsenabled cheat. Players can enter that cheat and shift-click the mummy, then select "delete" under the object panel, immediately deleting the mummy NPC from the game. Another way is to edit the tomb (with the same cheat still active), place a fire trap under the mummy, and set it to the armed and hidden option using control-shift-click!

A Sim may be cursed when a mummy breathes a dark foggy haze on them during a fight. The Sim will not be cursed if the mummy merely knocks them unconscious. A message will appear warning the player of the curse.

There are eight legitimate ways to lift this curse. The affected Sim may:

The player can also resort to using the testingcheatsenabled cheat and shift-clicking on the moodlet, removing it and its effects. This method can also be used to rid of any other pesky moodlets the player doesn't want their Sim to have. A more drastic way to do this is shift-click on the household's mailbox and click the option "Make All Happy", which removes all negative moodlets and maximizes the motives for all Sims in the household.

Consequences of the Curse[]

If the curse is not lifted within two weeks, the Sim will die. Within the final days of these two weeks, a dark black haze will slowly surround the borders of the player's computer screen or game window whenever the affected Sim is selected, as if the vision of the hopeless victim is slowly clouding over. Three hours before the cursed Sim dies, a mummy face appears on the screen and fades in and out. As time passes the face becomes blurry.

The victim of a mummy's curse will have a black, smoldering hue as a ghost. In addition, one of his or her traits will be replaced with the Evil trait, noticeable when a ghost is revived through the Science Laboratory.

Mummies appear as NPCs in The Sims FreePlay in the quest The Book Of Spells. Three female mummies wander around the park, and they are completely harmless. They look like a normal Sim, except they have gray skin, stitched looking mouths, a scratch on their chest, and bandages covering most of their body. Sims cannot become mummies. 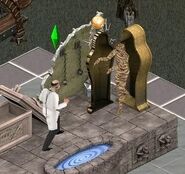 The Mummy probably guards this treasure

Mummy coming out of his sarcophagus

Looking into a Sarcophagus may result in a mummy...

A mummy with a plate of food. 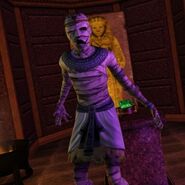 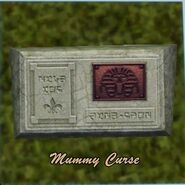 The tombstone of a Sim that died by Mummy's Curse