Not to be confused with Help:Moving pages. 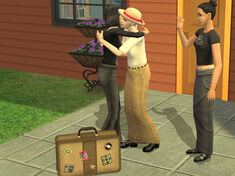 Moving is the act of moving a single Sim, multiple Sims, or an entire household into a residential lot. Sims can move for a variety of reasons, whether it be for marriage, college, making an NPC playable, or just settling into a new home. In most cases, moving is not an autonomous action and can only be done by the player.

A playable Sim can invite a non-playable Sim to join the household. Both the playable Sim and the other Sim must have a good relationship with each other before the interaction becomes available. Sims that get married will also move in to the household of the proposing Sim. In The Sims, up until The Sims 2: University a Sim that is moved in this way will change their surname to match the household they moved into, even if they were not getting married. Children cannot be invited to moved in using this method.

Stray animals can also be adopted. Like normal Sims, both the inviting Sim and the animal must have a good relationship with each other before the option to adopt becomes available.

Sims that move into a household may bring some money from their old household along with them. Players should note that townies who are moved into a household will have their memories wiped and replaced with a standard CAS history.[TS2] In The Sims 2: University, this will include a memory of going to college, even if they did not actually attend college.

Households are moved into a residential lot from the family bin, lots and houses bin, Manage Worlds[TS4] or the gallery,[TS4] making it available for play. A household can be moved into any unoccupied residential lot, provided that they are able to afford it.

Starting with The Sims 2: University, Sims in the family bin can be moved into occupied lots, thus merging the two households. This feature allows young adults going into college to join an existing (non-Greek) household, and allows graduates to do things such as rejoin their families or form households with friends from college.

A single Sim in The Sims can only move out of his or her current household by being asked to move in by a Sim in another. However, some custom content for The Sims allowed players to work around these limits.

In The Sims for console, the player's Sim will automatically move out of their current house when all goals for the current house are completed.

In The Sims: Bustin' Out for console, the player can move their Sim out of their current house by using the move out interaction on their current vehicle. Their spouse and children will move with the Sim but will not ride the vehicle with them; instead, they will appear near the mailbox at the new home. If there is a second player present, the second player will ride in the vehicle with the first player when moving out.

In The Sims 2 and The Sims 3, single Sims are moved out by using "Find Own Place" from the newspaper or computer or by being asked to move in with a Sim in another household. They can bring other Sims from their current household with them in the process, thus splitting the household or moving the entire household out. Teens will move out when they go to college.[TS2:U] When a Sim moves out, other Sims in their household will go over to them to wave goodbye. This may occur even if the Sims have a negative relationship.[confirmation needed][TS2] Sims that are moving out will be picked up by a taxi,[TS2][TS3] even if they are simply moving to a different apartment unit on the same lot.[TS2:AL] In The Sims 3, Sims may simply walk over to their new home if it is close enough.

In The Sims 2, a Sim on the receiving end of a break up interaction will move out of their household, even if they do not live in the same household as the Sim that is breaking up with them.

In The Sims 3, an active Sim may receive an invitation to move in with a Sim they are best friends with. If the player accepts, they will be taken to the edit town view where they can move the two Sims into any available residential lot. This invitation may happen at random anytime after the option to manually ask the Sim to move in becomes available.[1][2]

A household can be moved out of a residential lot to the Family bin, the Lots and Houses bin or to another residential lot. This may be done to give a large household more room, or to allow another household to move in without merging the households.

To move out an entire household in The Sims, the player must be in the neighborhood view. Once moved out, the household will be in the family bin.

In The Sims 2, a household can be moved with its house into the Lots and Houses bin, but doing so is not recommended, as it will corrupt the neighborhood. A household can be safely moved into the family bin without their house, but all possessions in the house that have not been placed in inventory will be sold for their current value.

In The Sims 3, a household can be moved out and then moved in without being placed in the library. The player does not need to leave the active household in order to do this. The household's possessions can be automatically placed in the family inventory or be sold upon moving. Players can usurp an existing household when they move a household onto an occupied lot; if story progression is enabled, the evicted Sims will inhabit another residential lot.

With patch 1.55, it is also possible for Sims to move from one world to another (e.g. moving from Riverview to Bridgeport). Moving to different worlds doesn't cost anything, although Sims must have at least §20,000 on hand to allow them to move.

In The Sims 4, households can move by using the phone or computer. They get the option to keep or sell all furnishings (objects). In the latter option, the furnishings will remain in the property for the next household. This will consequently make more money available to the outgoing occupants but make the lot more expensive for the incoming occupants. If a household decides to sell all their furnishings and they own any businesses, restaurants or vet clinics in Get to Work, Dine Out and/or Cats & Dogs, these will also be sold back to the community. These businesses, restaurants or vet clinics will need to be purchased as unfurnished lots by whoever wants them.

The following memories are associated with moving in The Sims 2.

Retrieved from "https://sims.fandom.com/wiki/Moving?oldid=886381"
Community content is available under CC-BY-SA unless otherwise noted.