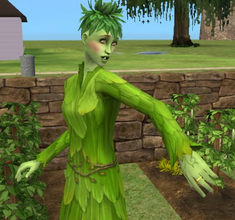 Merge
This article or section is being considered for merging with PlantSim. See the discussion page for details.
PlantSims in The Sims 2: Seasons, The Sims 3: University Life and The Sims 4 have different motives than normal Sims.

In The Sims 2: Seasons, PlantSims have only three motives, they require the same needs as all plants.

Love works very much like the social need does for a regular Sim, and can be raised in the same ways.

The sunlight need is similar to the energy need of non-PlantSims, in that energy depletion affects PlantSims much as energy depletion affects non-PlantSims. However, maintaining or raising the sunlight need can be done by exposing the PlantSim to sunlight, either by taking them outside, putting them near a window, or putting them in a room with a greenhouse roof. At night, the Toasty Garden Lamp sans Toast can be used to restore the motive. The sunlight need is also somewhat similar to the power need of Servos, though PlantSims do not have to become inactive to replenish it. The "maxmotives" cheat does not replenish this motive.

PlantSims have invisible motives as well: comfort and fun. If these motives are depleted, the PlantSim's mood could be in the red even when sunlight, water and love are completely full. A PlantSim's motives may also glitch — all the visible and invisible motives may be filled, but their moods could still be in the red.[citation needed] This can be fixed by having the PlantSim go to another lot.

A PlantSim's love and water motives are affected by being in the room with a Snapdragon Bouquet.

In The Sims 3: University Life, the hunger and bladder motives are covered by leaves, as PlantSims do not have these motives. The game claims that PlantSims "absorb nutrients ambiently" in the tooltip for the hunger motive, and that they "utilize fluids in a far more efficient manner than normal Sims" in the PlantSim lesson, explaining their absence. The hygiene motive is replaced by a Water motive, which can be filled by having the PlantSim come into contact with water (such as by swimming, using a hot tub, or taking a shower). PlantSims receive a "Dehydrated" moodlet if this need is low and a "Hydrated" moodlet if it is high.

While a PlantSim's energy need can be satisfied by sleeping in beds, PlantSims can also "photosynthesize" to restore their energy. Unlike The Sims 2: Seasons, in which PlantSims can absorb sunlight while doing other things, this involves a PlantSim burrowing into the ground and becoming a plant. It can only be done outdoors during the day, and will also replenish the water motive.

In The Sims 4, PlantSims have one unique motive; Water, which replaces the bladder motive. The hunger need, though not renamed, does however work differently than with normal Sims, as PlantSims require sunlight, rather than food to replenish it. When standing outside in the sun, PlantSims gain the “Photosynthesizing” +2 energized moodlet.

PlantSims can replenish their water need by drinking a glass of water or a drink, having a shower or having a bath. Having the water need fulfilled is very crucial, as PlantSims require water in order to photosynthesize and fulfill their hunger. If a PlantSim does not get enough water, they will dry out, causing their hair to turn gray and have hunger deplete after 24 hours.

If both the water and hunger needs aren't satisfied, PlantSims will receive the "Parched" and "Sun Starved" uncomfortable moodlets. If both needs are not replenished within 24 hours, the PlantSim will wilt away and die.

Retrieved from "https://sims.fandom.com/wiki/Motive_(PlantSim)?oldid=886505"
Community content is available under CC-BY-SA unless otherwise noted.