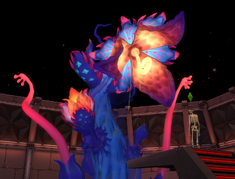 Mother Plant, also referred to as Mother, is a deadly plant in The Sims 4: StrangerVille. The plant resides in an underground laboratory and is the main cause of StrangerVille's "strangeness," as she creates bizarre fruit and other objects that cause infections and possess local Sims.

Upon meeting the Mother, a Sim can attempt to fight or taunt the Mother by themself, but the Mother will kill them without a team to help.

To battle with the Mother, played Sim must prepare a successful vaccine, drink it, and apply it on 3 more Sims and ask them to join in a battle against the Mother.

Before the battle, the player can also prepare a few additional vaccines, which can be used as a weapon.

The player must then lead the team to the Mother's lair and begin the battle; the Sims will surround the Mother and start spraying it while avoiding her attacks, however, the player must be careful as the Mother will attempt to infect the team. Additionally, local Possessed Sims will wander into the room and attempt to attack the player's team members, preventing them from attacking the Mother.

The player must choose a specific tactic upon clicking on the Mother.

If you win, your Sim will kill the Mother by throwing a Vaccine into her mouth. and StrangerVille will be freed from infection.

If you fail, your companions will become possessed, and the Mother will eat your Sim, killing them instantly.

The Mother can later be revived by taking Bizarre fruit to her corpse.

Upon raising relationship to neutral, Sims may request a Bizarre fruit from the Mother.

Upon befriending with the Mother, the Sim may request a gift from her, including expanding lifetime, getting some money, or building up skills. The Mother can fulfill one wish per day

If the relationship is high enough and the Mother was already defeated once, a Sim can also use her to control the infection around the StrangerVille, including disabling it completely.

Possessed Sims can build a relationship with the Mother much faster.

Mother talking with a possessed sim. 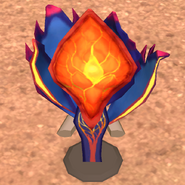 A tentacle of the Mother as a trophy.
Add an image to this gallery
Retrieved from "https://sims.fandom.com/wiki/Mother_Plant?oldid=924406"
Community content is available under CC-BY-SA unless otherwise noted.