Listen  /ˈmɒrtəmər ɡɑːθ/) lives in the Goth mansion with his daughter, Cassandra, and son, Alexander. His longtime wife, Bella, is missing, having been abducted by aliens, and hasn't yet returned.

Mortimer Goth was born outside of SimCity, in the Old Country, which could refer to a place such as the United Kingdom, or an unknown rural area, or could be a way of saying "someplace else". His father moved the family to SimCity when Mortimer was young. He is the son of Gunther Goth and Cornelia Goth, husband of Bella Goth, and father of Cassandra Goth and Alexander Goth.

In The Sims 3, Mortimer is a child (7 days to teen) who lives with his parents Gunther and Cornelia Goth (née Crumplebottom). He doesn't know his aunt, Agnes Crumplebottom, very well. Mortimer Goth and Bella Bachelor are best friends. He is also friends with Michael Bachelor, Bella's brother. His traits are Grumpy, Ambitious and Artistic, and he is a B+ student who likes to read and paint. He starts out with one point of Logic skill. He is often angry or in a bad mood for no apparent reason, even more, so it seems, than his parents. This is probably due, at least in part, to his grumpy trait. He does however, seem to be able to grow out of this, as in The Sims and The Sims 2, he is described as "Cheerful and outgoing." Also, when he grows up, occasionally there is a bug where his thumbnail, portrait, and marker show himself as a kid. This is also shown in his relationship portrait and as icons for other Sims' wishes.

Life leading up to The Sims Bustin' Out

In The Sims Bustin' Out, he lives in Goth Manor. They have a ghost problem. Here, he talks as if he is a spooky butler. When he is not working as a virus breeder, he spends most of his time synthesizing music. Mortimer looks slightly older in this game. Cassandra is notably absent in this game, this may be because she went to college (though this is not certain). In the intro, Mortimer can also be seen playing air hockey with death; death also scores a goal which, can also be hinting at Mortimer's age as his hair has turned gray.

There is a glitch where he becomes unplayable even if the player's Sim is male.

Life leading up to The Sims (console)

By The Sims (console), Mortimer now has a purple suit and black shoes with a black mustache. He lives with his wife Bella Goth and their daughter Cassandra Goth in 5 Sim Avenue. He shares a 95+ with his wife and a 20+ with his daughter. He works as a B- Movie Star in the Entertainment Career Track. He likes to play chess, read books, water the plants and mourn at the tombstones.

Life leading up to The Sims

Mortimer Goth, his wife, Bella, and his daughter, Cassandra, are first introduced in The Sims. He brings his Old Country upbringing into the modern age. He has an unusual fondness for insects. He starts as a Test Subject in the Science career track.

Between The Sims and The Sims 2, a lot happened in Mortimer's life. He rose through the ranks of his career from a Test Subject to a Mad Scientist, and became quite wealthy along the way. His parents, Gunther and Cornelia, both perished in two different fires. Bella also gave birth to another child, Alexander Goth. Bella got abducted by aliens, and is still missing at the present time. He strongly disapproves of his daughter being engaged to the town's Casanova, Don Lothario.

His widow's peak hair in The Sims seems to have appeared in some photos, but he wears it differently now. Mortimer is retired and dating Dina Caliente, and is on his 5th day as an elder, with 7 days left before he dies of old age. He has 9 cooking points and maxed cleaning and logic, which are the skills needed for the Mad Scientist position. Mortimer enjoys reading, playing chess and occasionally practicing piano. Also, when viewing his Sim DNA in SimPE, he has genetics for brown hair. This is very odd considering that both other games in the series and storytelling pictures in The Sims 2 show him with black hair, implying that it was dyed black in The Sims 2. Alternatively, it could be a mistake on the developers' part.

Mortimer is known to be the shoving Sim when a Sim from another household stargazes with a telescope during the day. This is because Mortimer is the first playable Sim created in Pleasantview. If Mortimer or Cassandra stargaze with a telescope, Nina Caliente will be the shoving Sim instead, unless John Burb is moved into the neighborhood. Because Mortimer had reached level 6 of the Science career, prior to his retirement, he has a Science career reward available for him to purchase.

Life leading up to The Sims 4

Mortimer appears in The Sims 4 alongside his wife Bella, and their children Cassandra and Alexander. Mortimer and Bella had previously appeared, in slightly different versions from the final release, in promotional materials for the game, including renders and the The Sims 4: Create A Sim Official Gameplay trailer. However, it has been officially confirmed that this version of Mortimer exists in an alternate continuity to the character who has appeared in previous games.

In the game, he lives with his family in Willow Creek, in the Ophelia Villa. He is an adult, 20 days away from becoming an elder. He works in the Writer career at Level 3 (Freelance Article Writer) and has the Knowledge - Renaissance Sim aspiration. He has reached Level 4 of the Writing skill, is friends with his daughter and son, and sweethearts with his wife. He knows no one outside of his household.

In the trailer, Mortimer is shown to have three traits, which are Genius, Bookworm, and Creative. He's also shown to have an aspiration of Renaissance Sim, and a Quick Learner bonus trait. In game his traits are slightly different, as Genius has been replaced with Outgoing, but his other two traits and aspiration remain the same.

Unlike previous Sims games, there is no mention of his parents Gunther or Cornelia in The Sims 4.

The most significant event in Pleasantview's storyline is the mysterious disappearance of Mortimer's wife, Bella. All evidence points to alien abduction, but it's interesting to note that she was last seen "scaling the deck" of Don Lothario's condo. Could it have been that she was looking through Don Lothario's telescope when she was taken by the aliens? Bella's disappearance was well-publicized, with "missing persons" notices appearing on milk cartons and in papers. This publicity has led to many theories and rumors, and even supposed sightings in Strangetown. As of The Sims 2, she remains missing. Since Bella is gone, she and Mortimer are no longer considered to be married, and Mortimer can remarry. The story does not explicitly state how this came to be. Mortimer is now romantically involved with Dina Caliente, unaware she is only dating him to gain access to his fortune. Oddly, Mortimer wants to flirt with Dina's sister, Nina, when the game starts out. He also has a positive memory of Bella's abduction, even though it's the memory of her being abducted - which can only be obtained as a negative memory in normal gameplay - instead of the memory of her meeting aliens, the one intended for Knowledge Sims.

Mortimer Goth in Other Games

Mortimer Goth is perhaps one of the most well known Sims in its series. He appears in other games such as The Sims: Bustin' Out, and the TV family on The Sims 2 for GameBoy Advance. 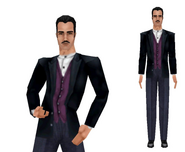 Mortimer in the poster of Two Men, A Woman and One Monkey from The Sims: Superstar with Bella Goth, Bob Newbie, and a monkey.

Mortimer playing in the fountain.
Add an image to this gallery

Mortimer Goth in The Sims 2

Mortimer searches the skies for Bella

Bella Goth plays on the swing set with Mortimer while her mother is waving at them.

Mortimer Goth and Bella Goth are fishing together.

Mortimer Goth plays with Bella Goth on the play set while Bella's mom argues with another lady.

Mortimer Goth as a child.

A large, Sim painted, picture on The Sims 3, could that be Mortimer (without a mustache) and Bella?

Mortimer Goth and his parents

Mortimer on his bike.

Mortimer at the park.
Add an image to this gallery

Mortimer with Bella on render from The Sims 4 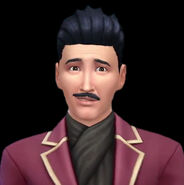 Mortimer in a promotional screenshot for The Sims 4: Spa Day

View past articles · Vote on future Featured Articles · Other Featured Content
Retrieved from "https://sims.fandom.com/wiki/Mortimer_Goth?oldid=798084"
Community content is available under CC-BY-SA unless otherwise noted.