Morrigan Hemlock is a vampire from The Sims 3: Late Night, who resides in Bridgeport with her family. She is married to Wogan Hemlock (despite her Commitment Issues trait) and has a daughter with him, Belisama. She is said to have been a normal Sim once, but she was turned into a vampire by Wogan. She works as a Getaway Driver in the criminal career track. She is enemies with Jessica Talon and Beau Merrick and best friends forever with Elvira Slayer, William Fangmann and her daughter. Initially she has 4 skill points in drums and athletic skill and 1 point in logic.

Unlike many vampires, her favorite color is turquoise instead of black. This is likely because she wasn't born a vampire, she was turned. She has pale, slightly greenish skin as a vampire, but tanned skin as a human.

Her good friends relationship is unexplained with William Fangmann, as he works in Law Enforcement and Morrigan works in the Criminal Career track.

In The Sims 3: Outdoor Living Stuff, there is a telescope named after her, called Morrigan's Star Gazer, which costs §820.

Morrigan Hemlock is mentioned in one of the object descriptions from The Sims 4: Movie Hangout Stuff.

Morrigan standing by a stereo 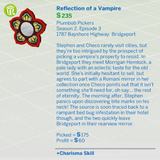 The object description in which Morrigan Hemlock is mentioned.
Add an image to this gallery

Retrieved from "https://sims.fandom.com/wiki/Morrigan_Hemlock?oldid=936598"
Community content is available under CC-BY-SA unless otherwise noted.