Moonlight Falls is a world featured in The Sims 3: Supernatural.[1] It was first seen in the official announcement trailer.[2]

The Sims 3 producer, Kari St. John, stated that Moonlight Falls was "inspired by the misty valleys of the Pacific Northwest".[3] EA representatives have not gone into detail about the world, but have described it as a mysterious town, filled with mystical creatures and was founded in 1974.

It is situated near mountains with snowy peaks. The world has a variety of new rabbit holes, including Create a World assets, including a town hall, a mausoleum, and a water tower. There are a lot of trees in the area, as well as a river which leads to a waterfall and two rusted or wooden bridges over the river. There is also a small flat bridge, possibly concrete, across the river right before the waterfall.

Moonlight Falls comes with character stories, such as feuding between founding families. The vampire family (the Van Goulds) and the werewolf family (the Wolffs) are at odds over who founded Moonlight Falls. The patriarch of the Van Gould family is Ayden Van Gould, and the patriarch of the Wolff family is Pappy Wolff. Despite the feuding, the younger generations of these families have found love.[4]

It seems that many of the Sims found in Moonlight Falls make reference to supernatural-themed media. For example, The Twilight Saga is referenced in the Swain Family, Marigold Maldano appears to be a nod to Sookie Stackhouse of True Blood and the Roommates Supernatural household bears a resemblance to the series Being Human. Other series possibly referenced in this neighborhood include Charmed, Bewitched, Harry Potter and Grimm. As well as these cultural references, the Bloom Institute of Wellness and Commonwealth Court are based on real-world buildings (Toronto's Victoria Hospital for Sick Children and Lowell, Massachusetts' city hall respectively).

Moonlight Falls is a unique town, as it seems to have a mountain group in the centre of the Supernatural Town. There is a large amount of bridges suggested for transportation around town. There is a beach that almost looks like a rocky coastline on the middle-east area of the suburb.

It has a very similar layout to The Sims: Makin' Magic neighborhood Magic Town, including a rocky river in the same shape that cuts through the town, a waterfall and bridge in the same place, a mountain range, and the same type of trees throughout the town.

These lists are in alphabetical order.

There are a total of 31 residential lots in Moonlight Falls.

If The Sims 3: Ambitions is installed, four lots will be added to the town:

If The Sims 3: Pets is installed, two lots will be added to the town:

If The Sims 3: Showtime is installed, two lots will be added to the town:

However, if The Sims 3: Katy Perry's Sweet Treats is also installed, the Performance Park from The Sims 3: Showtime will be replaced with this lot:

If all four packs are installed, the town will only have 32 commercial lots.

§4,000
Difficulty: 4
Doreen Caliente, Rick Durwood, Serena Durwood, Zoe Durwood, Zack Durwood
On the outside, the Durwoods would make others jealous with their nice house, two adorable children, and a father with a great job. However, all is not what it seems between a mother in-law who disapproves of her daughter's husband and two kids who always get what they want. Can the Durwoods learn to live together or will the family spiral out of control?

§2,500
Difficulty: 1
Gladsten Farmwell
Moonlight Falls is a perfect fit for a guy like Gladsten. With all the fishing, the great outdoors, and friendly people, he never wants to leave…and plenty of local ladies are happy about that! Can Gladsten stick around in Moonlight Falls or will he be run out of town by an angry mob of ex-girlfriends?

§4,500
Difficulty: 4
Flora Goodfellow, Dahlia Goodfellow, Pip Goodfellow, Fawn Goodfellow
Fairies are typically curious about human Sims, and the Goodfellows are no exception. Led by their sprightly matriarch, Flora, the mischievous Goodfellows have engineered several encounters with humans, from simple pranks to elaborate social experiments! Their crowning achievement is an adoption mix-up resulting in Linda Rodgers’ newly adopted baby being a fairy with the Goodfellows taking possession of the human baby instead. Will raising Fawn, their human toddler, bring them more than they bargained for?

§2,500
Difficulty: 1
Chauncey Grimm
Chauncey Grimm is a single guy with a passion for storytelling…especially tales of the supernatural. While he can’t prove it, he believes he must be a descendant of the famous Grimm brothers, the writers of many classic fairy tales. Chauncey has come to Moonlight Falls to carry on his family legacy. But will he just write stories or become the main character in his own supernatural story?

§47,000
Difficulty: 3
Rainflower Ivy, Annalove Ivy, Daydream Ivy, Peanut Ivy
Once on the verge of living on the streets, the hippie Ivy family now lives the “trustifarian” lifestyle after Rainflower inherited a fortune from a long-lost great-aunt. No longer bound by the shackles of a budget, this family can have anything they’d like, except they don’t know what they want! Will the influx of Simoleons be a curse for the Ivy family?

§3,700
Difficulty: 5
Flint MacDuff, Joanie MacDuff, Jules MacDuff, Joe MacDuff, Faith MacDuff, Felicity MacDuff
This is one large family with another member on the way! To an outsider, this combined family of witches and humans may seem strange and full of chaos, but the MacDuffs are quick to pull together and support each other in a crisis (like that time Faith’s hamster died…). The parents, Joanie and Flint, do their best to manage such a large household, but will the addition of Baby MacDuff be one MacDuff too many?

§2,500
Difficulty: 1
Marigold Maldano
Marigold only recently realized that she’s descended from a family of powerful fairies. She was raised by her late grandmother and recently inherited the family home, where she lives alone. Strange things seem to happen wherever she goes. Is she a magnet for supernatural events or is she just crazy?

§26,000
Difficulty: 3
Annie Nix, Mike Nix, Mara Nix
The Nix family may be the most “normal” family in Moonlight Falls…which makes them one of the most unusual families in Moonlight Falls! Mike and Annie met at a high school dance, dated through college, and then got married when Mike graduated from medical school. Mara was born a year later. Will the Nixes be able to find some friends or are they just too normal for a place like Moonlight Falls?

§4,300
Difficulty: 2
Janet Pok, David Pok
David Pok always had a thing for assertive women, but when the beautiful Janet slammed his head down onto the hood of her police cruiser he knew he had found The One. With careful planning, David ensured that Janet would be his arresting officer on his next heist. She read him his rights, he read her a love poem scribbled on a counterfeit bill, and the rest is history. Can Janet turn this love into a life sentence, or will she let David go early due to bad behavior?

§5,000
Difficulty: 3
Linda Rodgers, Sophie Rodgers
Linda Rodgers has more love in her pinky finger than some Sims have in their entire heart! Thanks to the Moonlight Falls adoption center, Linda’s lifelong dream of starting a family has come true. Of course, thanks to a little… intervention by some mischievous fairies, Linda will discover she is getting more with her adoption than she ever dreamed of! What will Linda say when little Sophie grows up to be a beautiful young fairy?

§2,300
Difficulty: 2
Dante Morganthe, Argus Brown, Violet Slymer
A Vampire, Ghost, and Werewolf all living under one roof? And, what’s more, they’re all best friends! These three Supernaturals are loving life and are excited to be in their new home in Moonlight Falls. Will their human neighbors be accepting of the three roommates or will they have to depend on each other for friendship?

§2,700
Difficulty: 2
Dayvid Musgrave, Branch Timbley
These two roommates are Best Friends Forever and share a love for living off the land! Branch is a Fairy with the greenest thumb of all and Dayvid is a Vampire who won’t touch meat or drink plasma. Can Branch make a living in nature? And how long can Dayvid repress his nature?

§3,000
Difficulty: 3
Alice Fitzgerald, Malcolm Harris, Deedee Wynn, Haley Sumari
These roomies met at a Supernatural conference because of their shared love of all things mystical. Although none of them possess any un-humanly powers, you wouldn’t know it by how they dress and act. They love being around all the interesting characters of Moonlight Falls but how will the town’s “real” supernaturals react to their masquerading?

§5,000
Difficulty: 2
Chester Swain, Bailey Swain
New to Moonlight Falls, Chester Swain came in the hopes of providing a better life for his daughter Bailey, who he’s raised alone. She’s his whole world, and he loves her very much even if he can be a little overprotective. Despite the time they spend together, Chester is somehow unaware of Bailey’s fanatical obsession with the supernatural. Can Chester find a way to protect his daughter from her own curiosity?

§56,000
Difficulty: 3
Ayden Van Gould, Tristan Van Gould, Emelie Van Gould
The Van Goulds go back hundreds of years to the very first days of Moonlight Falls. Of course, for a vampire family that’s just a single generation! Ayden Van Gould, the current patriarch, claims to have had a hand in the actual founding of the town – a claim which is hotly disputed by his rivals, the Wolff family. Can the Van Gould’s secure their place as the Moonlight Falls founders, or will the Wolffs rise up and claw it away from them?

§5,500
Difficulty: 2
Beatrice Crumplebottom, Belinda Crumplebottom, Bianca Crumplebottom
The three Crumplebottom sisters have very little in common with one another, and yet they have never been able to live apart. They feel right at home in Moonlight Falls, which, like their family, is full of drama and magic. Will these three witches ever find balance and serenity, or are they destined always to express their love for each other through a combination of trickery and shouting?

§20,000
Difficulty: 3
Samuel Goth, Helen Hall, Frida Goth, Olivia Goth
After having the house to themselves for a while, the Goth Ghosts are now living with a human in their house. Will the Goths be able to get accustomed to living with a human for the first time or will the inquisitive Helen Hall ask too many questions?

§1,700
Difficulty: 1
Pappy Wolff
Pappy is the patriarch of the Wolff clan and was raised with the dogged belief that the Wolffs were the original settlers of Moonlight Falls…a claim hotly disputed by the Van Gould family. Pappy lives alone on the opposite end of town from all those “undead deadbeats”. Will the Wolffs and Van Goulds continue their feud? Or can Pappy be the bigger Wolff and make peace?

§11,000
Difficulty: 2
Navita Singh, Param Singh
The Singhs met in medical school and quickly found themselves swept up in a fairytale romance… But this is a fairytale with a twist! On their wedding night, Param was surprised when his new bride Navita suddenly turned into werewolf and turned him into one too! Will the Singhs live wolfally ever after? Or will Param be haunted by his carefree days as a bachelor (and a human)?

§11,000
Difficulty: 5
Dwayne Wolff, Erica Wolff, Waylon Wolff, Wilhemina Wolff, Gator Wolff
The Wolffs are one of the oldest and proudest families in Moonlight Falls. The only other family that’s been around as long is the Van Goulds, and these two clans are bitter rivals. Debate rages over the identity of the town’s original founders, but the Wolffs will never surrender their claim. Will the Wolffs finally find the respect they feel they deserve or will Ayden Van Gould buy his way into Moonlight Falls history?

Additionally, four Sims are already deceased at the start of the game, yet they are just playable ghosts: 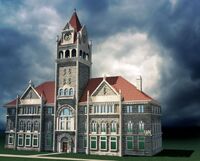 Retrieved from "https://sims.fandom.com/wiki/Moonlight_Falls?oldid=912000"
Community content is available under CC-BY-SA unless otherwise noted.