The Sims Wiki
Register
Don't have an account?
Sign In
in: Premade families, Families with 5 generations, Families from The Sims 2 (base game),
and 11 more
English

Listen) family is a large family residing in Veronaville. Their name is a reference to the Montague family in Romeo and Juliet, as is much of Veronaville. They are involved in a feud with the Capp family. Romeo Monty is currently in a secret relationship with the Capp heiress, Juliette. The Monty family lives on the Monty Ranch. Several members of the Monty family are overweight, most likely because the family is involved in Culinary arts. The family is patrilineal while the Capp family is matrilineal.

The Monty family made a comeback in Monte Vista from The Sims 3 Store. There are two separate families in the town: the first generation and the newer generation.

Monty: a reference to the Montague family in Romeo and Juliet, as is much of Veronaville.
Patrizio Monty: Patrizio's character is a spoof of the patriarch of the Montague family in Romeo and Juliet.
Isabella Monty: Isabella's character is a spoof of the matriarch of the Montague family in Romeo and Juliet. She is also named for the virtuous central female character in Measure for Measure: a novice nun who pleads to Angelo for the life of her brother Claudio.
Romeo Monty: Romeo is a titular character in the famous Romeo and Juliet. He falls in love with his enemies' daughter, but is later banished when he accidentally kills Tybalt in a street brawl. His plans to meet Juliet are mixed up, and the play ends with their deaths.
Mercutio Monty: Mercutio is the witty friend of Romeo, and kinsman to the Prince, in Romeo and Juliet. He is killed by Tybalt, who is later killed by Romeo.
Claudio Monty: Shakespeare has two characters named Claudio: The lord of Florence in Much Ado About Nothing, and a gentleman in Measure for Measure.He could be a spoof combo, of the two namesakes.
Olivia Monty: Olivia is the main character in the play Twelfth Night.
Antonio Monty: Antonio is the title character in Shakespeare’s The Merchant of Venice. He is a middle-aged bachelor and merchant by trade who has his financial interests tied up in overseas shipments when the play begins.
Hero Monty: Hero falls in love with Claudio in Much Ado About Nothing. She is wronged by Don John and Borachio, and is abandoned at the altar by Claudio so she fakes her death until her name is cleared.
Beatrice Monty: Beatrice is a central character in Shakespeare's Much Ado About Nothing. In the play, she falls in love with the character Benedick, whom is not her brother.
Benedick Monty: Benedick is a central character in Shakespeare's Much Ado About Nothing. In the play, he falls in love with Beatrice, who was not his sister in the play.
Bianca Monty: Bianca is the younger sister of Katherine in The Taming of the Shrew. She is loved by Gremio and Hortensio, and eventually marries Lucentio. In Othello, Bianca is Cassio's mistress.
Valentine Monty: Is one of The Two Gentlemen of Verona. He falls in love with Silvia, becomes exiled, and leads a band of robbers. also is an attendant on Orsino in Twelfth Night. Valentine is also the name of Mercutio's unseen brother in Romeo and Juliet.
Silvia Monty: Is the faithful lover of Valentine, and the victim of an attempted rape by Proteus, in The Two Gentlemen of Verona.
Bassanio Monty: Loved by Antonio, is the suitor who wins the heart of Portia in The Merchant of Venice.
Portia Monty: Is the central female character in The Merchant of Venice. She disguises herself as a lawyer in an attempt to thwart Shylock's attempt on Antonio's life.


Pantalone: The Italian name for "Pantaloon", after the popular character found in Commedia dell'arte. It is also the Italian and Spanish word for trousers, slacks, breeches, pants.
Proteus Pantalone: In Greek mythology, Proteus is an early sea-god - whose name suggests the "first", as protogonos (πρωτόγονος) is the "primordial" or the "firstborn".
Julia Pantalone: Julia is usually a woman's given name or a surname. It is of Latin origin and means "youthful," she is Proteus's lover in "Two Gentlemen of Verona."
Vincentio Pantalone: (pun off of) is in Shakespeare play "The Taming of the Shrew".
Fransisca Pantalone: Its source is an Ancient Germanic expression meaning "French person".

Zanni: refers to either the archetype comic servant of the Commedia dell'arte or various stereotypical servant characters of the same genre. The English word "zany" is derived from "Zanni".
Overdone Zanni: a pun to mean Overdone Zanni. Mistress Overdone is a prostitute in "Measure for Measure."
Lucio Zanni: Lucio is a Gentleman and friend to Claudio in the Shakespeare play "Measure for Measure". 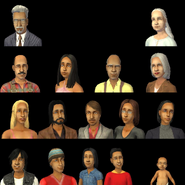 The Monty family is patrilineal, meaning that things pass down the male line. Given that both the Capps and Summerdreams are matrilineal, the Montys cannot easily be married to either of them. Patrilinearity does not mean patriarchy.

Assuming European patriarchy and patrilineage, Antonio Monty should be heir, despite that Romeo, as the last in line of the male successors, is presented by Maxis as the heir. There are multiple player interpretations. One is that Maxis has goofed up the birth order. Another is that Romeo's father is Patrizio's favorite son, and Claudio's favorite son is Romeo.