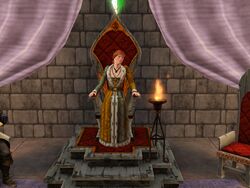 A female Monarch sitting on her throne

The Monarch is a Hero Sim introduced in The Sims Medieval. This is the first out of 10 hero classes that are availabe as a playable Sim that the player can control upon starting the game.

The Monarch's main job is running their Kingdom. They have to complete their daily responsibilities that include doing paperwork by writing laws and treaties, proposing and voting on edicts, holding court to listen to petitions by the villagers, punishing Sims in the Judgement Zone, and improve their kingdom's stat and dealing with neighbouring leaders.

They live in the Castle, and their workspace is the throne room and have living quarters on the second floor including a bedroom, a bathroom and a dining room. How the Monarch rules the Kingdom affects his/her popularity with its occupants.

The Monarchs are skilled fighters, and much like most of the heroes can challenge Sims to a duel to improve their combat ability, however most of the combat tasks is usually handled by their Knights, but some quests require the monarch to fight themselves.

Once the player has completed the kingdom's ambition, they can have any of the non-monarch heroes found a new kingdom, as the new monarch.

In the Royal Assassination quest, the Monarch can be assassinated and the throne can be ursuped from them by a spy.

Retrieved from "https://sims.fandom.com/wiki/Monarch?oldid=848617"
Community content is available under CC-BY-SA unless otherwise noted.