The Sims Wiki
Register
Don't have an account?
Sign In
Advertisement
in: Articles missing information about The Sims 4, Sims, Female Sims,
and 30 more

Life leading up to The Sims (console)[]

In the console version of The Sims, Mom is featured as an elderly woman living along with her child (the player's Sim) in her home. Unlike in The Sims Bustin' Out, Mom is playable in The Sims. Once she has disrupted the player's Sims' daydream, Mom has strict expectations for them and will constantly nag. If the player asks Mom to do any sort of house work (including cooking, cleaning, repairing, etc.), she will refuse to do it, thus placing the burden on the player's Sim. ("I'm not a maid!") She will also make messes herself and nag the player's Sim to clean up after her.

The only two ways to keep the house clean is to keep a "Meet Major Dormo" in the backyard, or hold out a chance for Mom to be abducted by aliens with the Horrorwitz "Star-Track" Backyard Telescope. After the abduction, a neater personality should replace her original one. However, it is nearly impossible to get abducted in story mode. Mom can sometimes be made to cook after completing the 'Cook Dinner' goal by replacing the fridge and stove, which don't have to be the same model as the originals. Mom also has 4 cooking skill points, this is most likely to stop her from causing a fire if she or the player makes her cook.

The player can move out of Mom's home, after they have warmed Mom up to them and "borrowed" §800 from her. They can then move into Mimi's Place or Dudley's Trailer (depending on the player Sim's gender). Mom periodically visits the player Sim, but can be very cruel to them by insulting, slapping and teasing them. Rarely, she'll bring some flowers in a vase for your Sim. However, clicking on them will result in the option "clean up."

Towards the end of the game, Mom will get married to Malcolm Landgraab and she moves into his house leaving the player's Sim Malcolm's "drafty old mansion" where they can live with their spouse and two children for the final level of the game. This makes Mom the stepmother of Malcolm's children Mimi and Dudley.

Life leading up to The Sims Bustin' Out[]

In The Sims Bustin' Out, Mom is featured as an older woman wearing a green facial mask, along with a pink bathrobe and pink bunny slippers. She is the mother of the player's Sim, ex-wife of the infamous Malcolm Landgraab, and former stepmother of Mimi and Dudley Landgraab. Mom lives in a quaint country home, surrounded by farms. In this game, she is a lot nicer to the player's Sim. Whil still a bit of a nag, Mom will look after the player's Sim and prepare food, but when it comes to jobs around the house she can be a slacker.

When the player first begins to play, the Sim is in a nightclub setting and must kiss either Peter Tutti or Candi Frutti (depending on the player's Sim's gender). Mom then pops up out of what seems to be thin air and tells the player's Sim to stop daydreaming and lectures the player's Sim because Malcolm is stealing their motor-scooter. The player is then pulled back into reality and the setting changes to the front of Mom's house, where the Player's Sim was daydreaming.

At Mom's, they must complete a set of five pre-decided goals, including "Find a Job". Until the Sim uses the newspaper to do this, Mom will nag them repeatedly. Her nags can be ignored and the player can remain living in her home, but that is up to the player to decide. This is a great level to raise some skills before trying a career. Living in Mom's House at any point in the game will freeze the Sim's work schedule and stop all relationship decay. Many motives will also freeze or slow, and should the player deplete all of their money, a seemingly random phone call will supply more.

Life leading up to The Urbz[]

Though Mom does not appear in The Urbz (the only first generation console game in which this is the case), she is mentioned near the beginning of the game. The Urbz takes place after The Sims Bustin' Out, and the player moves into an apartment. Will.i.am will text the player that your Mom called wishing you well and passes you §300 from her to start you off with, and he gives the player a refrigerator (found in every District), a sofa (from his district, Cosmo Street) and a shower (from The Foundry).

Mom Landgraab appears alongside her husband and step-children in The Sims 4 Gallery. She also carries a special message in her career slot that is unique to her. The message reads as follows - "Good old Mom! Mom is full of unconditional support. She is always there for you. Always supportive. Always trying to guide you, to show you the way, to control you". Technically, Mom is considered self-employed and she has no skills when first played.

Her relationship to Malcolm is fairly average, but she only considers her step-children acquaintances. Her appearance is a mash-up of her previous two looks, she has the pink bathrobe and bunny slippers from Bustin' Out and her glasses, skintone and hairstyle being from The Sims for consoles. 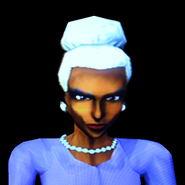