Molly French is a pre-made female Sim, living in Sunset Valley, the neighborhood shipped with The Sims 3. She moved in with her friend, Fiona McIrish, to help raise her toddler daughter, Sandi French. When first played, she is 15 days away from becoming an elder.

She has wavy brown hair with a colorful shirt and blue jean shorts. Molly appears to have a strong affinity for Cooking, as she begins the game as a Pastry Chef in the Culinary Career Track and a Cooking Skill on level 7. She is also often employed as the boss for the culinary career.[confirmation needed] However, her job performance starts out in the red, as though to imply that, as a single mother, she has been facing difficulties balancing work and raising Sandi, or else her party-hardy attitude prevents her from effectively doing either, although the latter may be undermined by the fact that she has a strong relationship with her daughter.

Molly does have quite a few friends in Sunset Valley such as Fiona, River McIrish, Madison VanWatson, and Monika Morris. Her other initial skill is Charisma on level 1, and she carries a stereo and two copies of the book called Special Snowflake. 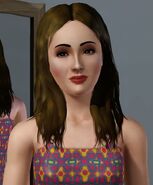 Molly's outfits
Add an image to this gallery
Retrieved from "https://sims.fandom.com/wiki/Molly_French?oldid=935190"
Community content is available under CC-BY-SA unless otherwise noted.