Mitchell Kalani is a pre-made playable Sim who appears in The Sims 4 base game, residing in Oasis Springs. He lives with his three roommates: Zoe Patel, J Huntington III, and Gavin Richards. He is acquaintances with his roommates at the start of the game, and knows no-one outside of his household.

Mitchell is a young adult, with 24 days remaining in that life stage. Despite having the Joke Star aspiration, he is employed in the culinary career as an assistant dishwasher. He has two points each in the mixology and comedy skills. Judging from his surname and appearance, Mitchell might be of Pacific Islander (most likely Hawaiian) descent.

Mitchell and his roommates appear to be based on the lead characters from the sitcom New Girl, a US television series about an eccentric young woman named Jess and her three male roommates. Though Mitchell, J, and Gavin do not seem to be directly based on any one of Jess's roommates in particular, Mitchell bears the strongest resemblance to Nick, since they are both the resident slacker of their respective households. 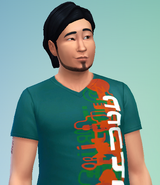 Add an image to this gallery
Retrieved from "https://sims.fandom.com/wiki/Mitchell_Kalani?oldid=938926"
Community content is available under CC-BY-SA unless otherwise noted.