The Sims Wiki
Register
Don't have an account?
Sign In
Advertisement
in: Objects, Objects in Ambitions, Objects built by Sims,
and 4 more

The miner is an object that can be created with the inventing skill in The Sims 3: Ambitions, but can also randomly be found for sale at the consignment store. It can be carried around in a Sim's inventory and placed on home or community lots to begin drilling. Holes drilled in the ground can be used to travel around town from one fully drilled hole to another, although a fair amount of travel time is still required. Players can name their tunnel openings and navigate to them selectively, and can also fill them up again should they no longer require them. In order to create a hole that can be used as a travel tunnel, a Sim must keep on drilling with the miner until they reach the bottom.

While drilling, there is a chance that a Sim will come across a random gem, some metal, a space rock, some scrap metal or a piece of furniture, along with other miscellaneous items such as Magical Gnomes of Invention. Occasionally, while drilling, a Sim will stop and the hole will glow from underground lights. The hole can then be explored for loot and various moodlets. Occasionally, a Sim participating in an underground adventure will be unable to make further progress after encountering an underground obstacle, forcing them to abandon the adventure prematurely due to a lack of points in the logic and athletic skills, however, there are other possible reasons such as a Sim not being thin enough to fit through a crack. Having a Sim be in a high mood while adventuring is also recommended for best results. Whether or not the adventure is successful, the Sim may come up singed.

While drilling with the miner, traveling through a tunnel to another hole, or on an underground adventure, a Sim's hygiene will drop drastically.

Sims who use the miner after bedtime will disturb sleeping Sims on nearby lots, unless those Sims have the heavy sleeper trait. Sims will leave their homes and run to the miner and the Sim who is using it, and over a prolonged period of time, will form negative relationships with the person operating the miner. This occurs on both the home lot and public lots. Also, drilling a hole on the lot of a police station can result in helping a criminal to escape, which can lead to a monetary reward that can be collected at the abandoned warehouse. This cannot be done one after the other and it is necessary to wait a couple of days before being able to free another convict. 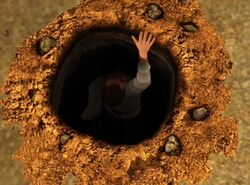 A Sim coming out of a drilled hole. 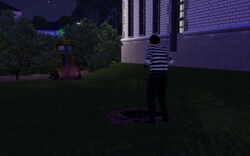